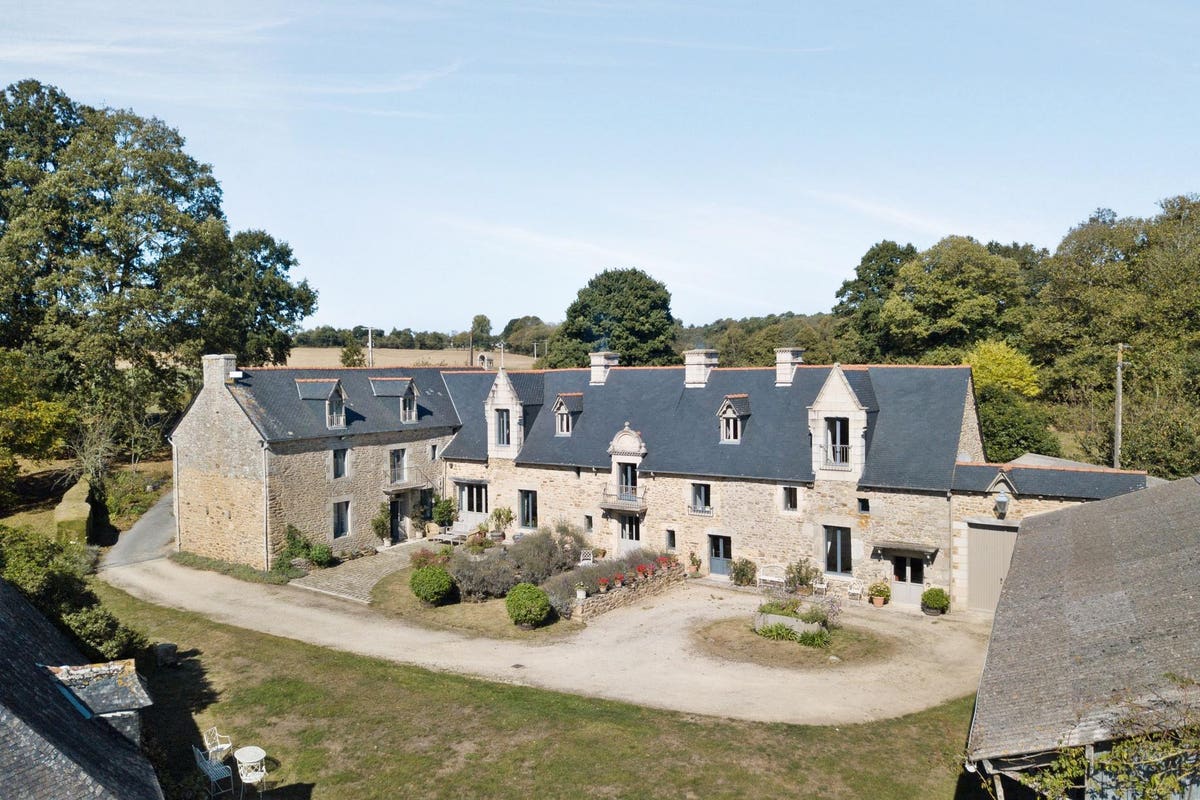 The origins of this manor in Brittany, France, date back a millennium to a time when the property held a defensive fort. Henry II of England was eyeing the region then, hoping to annex it as a possession.

The medieval structures were added in stages and remained largely untouched until renovation work was undertaken over the last two decades. The remodel, done in keeping with the style of Breton manors, retains the home’s authentic character.

Today, the granite house has a new slate roof sheltering some 780 square meters, nearly 8,400 square feet, of interiors. Dormer windows and a row of chimneys punctuate the steep covering.

Among the main living spaces are a drawing room, a TV room and multiple kitchens, some with informal dining space.

A baronial stone fireplace anchors the wood-floored library, which is topped by a rustic beam and entered through an arched stone doorway.

Tall windows bring light into the formal dining room. High ceilings, an oversized fireplace and a checkerboard-patterned floor enliven the space. A trio of staircases accesses the upper floors.

The seven bedrooms and five bathrooms include two family suites. Rustic wooden beams contrast with the vaulted white walls of one of the main bedrooms. All contain built-in storage.

Windows in the large office and meeting room overlook the grounds.

A 250-square-meter (nearly 2,700-square-foot) annex off the main house can be used for activities such as a music studio, a game room and/or a gym.

Other outbuildings include garages and a workshop. A small early medieval chapel on site contains a priest cell.

Terrace spaces, gardens, an orchard, a horse pasture and trees make up the rest of the property. A stream connected to an irrigation system borders the woods.

The three-hectare property, about 7.4 acres, is surrounded on three sides by a valley. Farmland abuts the fourth side.

Adjacent forest may be purchased through a separate agreement.

Sophie van Cayzelle of Groupe Mercure is the listing agent. The asking price is 1.05 million Euros or about US $1.28 million.

The manor is about two kilometers or 1.25 miles from the walled town of Dinan, which boasts a Gothic-style church, a clock tower and a railway museum, among other attractions. The port city, with cobblestone streets, ramparts and half-timbered houses, offers waterfront restaurants, arts and crafts shops and an annual medieval festival.

Groupe Mercure is an exclusive member of Forbes Global Properties, a consumer marketplace and membership network of elite brokerages selling the world’s most luxurious homes.