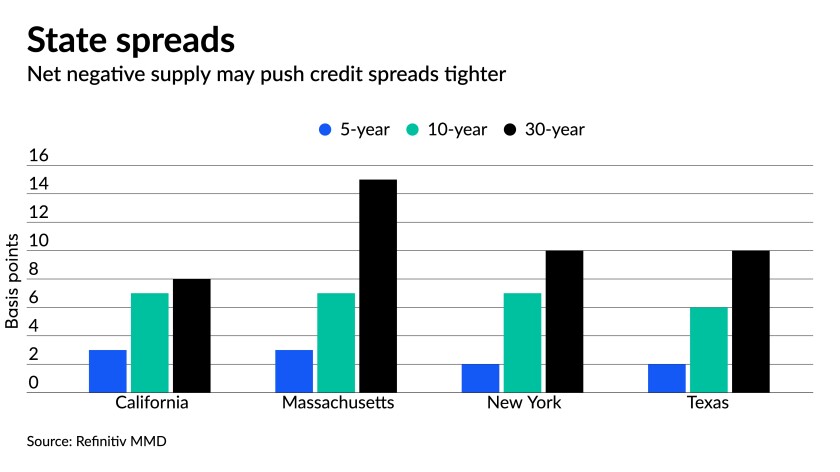 Municipals were slightly firmer in secondary trading while new-issues were repriced to lower yields from initial pricing wires. U.S. Treasuries were stronger and equities sold off ahead of the FOMC meeting Wednesday.

The current market technicals combined with a slowdown in issuance is creating a general malaise in the municipal market, according to a New York trader.

“The market is pretty quiet as it has been the last few weeks; there is really not a lot of supply to impact the market,” he said Tuesday. “Between low rates and the tight percentages it’s not like anyone is geared up and excited to jump and buy with both feet. The combination continues to put us in position with not enough bonds and a lot of money.”

Cash continues to build in investors’ accounts due to recent calls and redemption proceeds.

Net negative supply stands at $25.499 billion, according to Bloomberg data. The imbalance between supply and demand is most notable among large state issuers.

Texas leads with a whopping $9.8 billion net negative supply figure with California at negative $6.5 billion, New York at $3.52 billion, Massachusetts at negative $1.23 billion and Washington state at negative $643 million, even with its large GO sale Thursday.

Many participants have noted the high-tax states — California, New York and Massachusetts — will create even more demand for their paper, further pushing yields down.

The New York trader said he doesn’t expect any significant short-term change in market dynamics, until at least the fall, due to the potential for both economic volatility and the arrival of an uptick in volume.

“The specter of inflation and the global economy will impact the market if we go through another slowdown due to the new variant of COVID,” he said.

“There’s enough trepidation from the economists that there could be another slow down and shut down,” he noted. “If we go through all of that again like in the spring then all bets are off and rates will stay low.”

NYC TFA to sell $1.1B bonds next week
The New York City Transitional Finance Authority said Tuesday it will issue about $1.1 billion of future tax-secured subordinate bonds next week.

The tax-exempts will be priced for institutions on Wednesday, Aug. 4, after a two-day retail order period. The bonds will be priced by book-running lead manager Siebert Williams Shank with Jefferies and Loop Capital Markets as co-senior managers.

Also on Aug. 4, TFA will competitively sell the taxable deal. Proceeds from the sale will be used to refund certain outstanding bonds for savings.

Economy
The economy continues to recover, with durable goods orders and consumer confidence suggesting strength, but concerns about the Delta variant of COVID-19 and continued supply-chain problems cloud the future outlook.

“It appears the U.S. economy continues to be on a self-sustaining pace,” according to Ed Moya, senior market analyst for the Americas at OANDA.

Business investment “disappointed” in June, leaving it up slightly in the quarter, according to Diane Swonk, chief economist at Grant Thornton. She expects a rebound in the summer months, but “the largest hurdles are supply chain bottlenecks and uncertainty triggered by the spread of the Delta variant.”

Economists polled by IFR Markets surveyed anticipated a gain of 2.1% in May for the headline number, and a 0.8% rise excluding transportation.

“Economic growth in Q3 is off to a strong start,” said Lynn Franco, senior director of economic indicators at The Conference Board. “Consumers’ optimism about the short-term outlook didn’t waver, and they continued to expect that business conditions, jobs, and personal financial prospects will improve.”

She also noted, “Short-term inflation expectations eased slightly” and more “consumers said they planned to purchase homes, automobiles, and major appliances in the coming month,” suggesting “consumer spending should continue to support robust economic growth in the second half of 2021.”

This, in turn, will allow companies to continue “passing on rising costs,” said OANDA’s Moya.

Separately, home prices jumped 16.6% in May from a year earlier after a 1.4% increase, S&P CoreLogic Case-Shiller.

Economists expected a 1.5% increase for the month and a 16.3% rise annually for the national numbers.

Price gains were at record levels in May, said Craig J. Lazzara, managing director and global head of index investment strategy at S&P DJI, with prices nationally accelerating for 12 months in a row.

The housing market “remains hot after breaking home price records in May, but this is likely the peak,” said Moya.

Also released Tuesday, the service sector in Texas “accelerated” in July and although prices “eased” slightly, they remain near record levels, according to the Texas Service Sector Outlook Survey, released by the Federal Reserve Bank of Dallas.

Service sector activity in the Richmond area softened in July, according to the fifth district service sector survey released by the Federal Reserve Bank of Richmond. The indexes for revenues, demand and local business conditions were all down in the month, although still suggesting expansion.

“Growth of prices paid outpaced that of prices received, but participants expected the gap between them to narrow in the near future,” said the report.

The manufacturing index ticked up to 27 in July from 26 the prior month.

“Respondents expected price growth to slow over the next year,” said the report.

The employment index rose while average workweek fell. “Survey results indicated that many firms increased employment and wages in July, but they struggled to find workers with the necessary skill,” the survey said.

Lynne Funk and Chip Barnett contributed to this report.