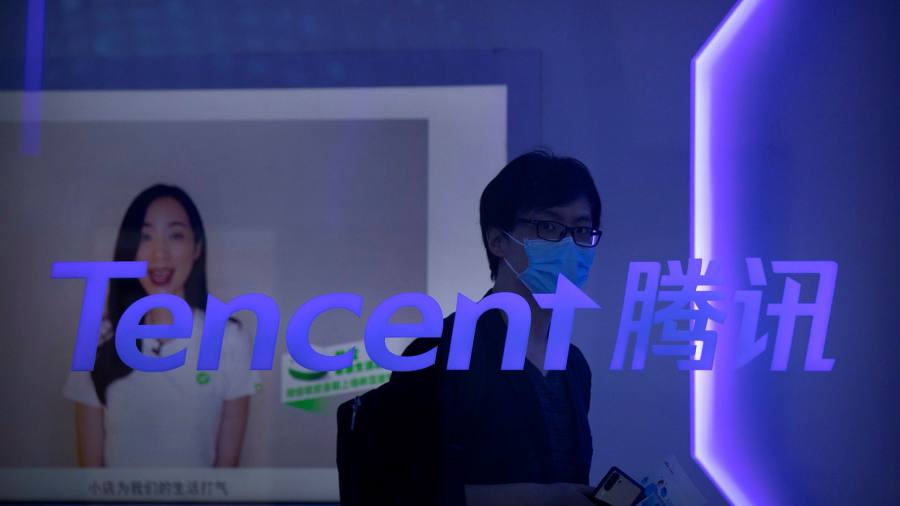 Regulators in Beijing held a call with executives from global investors, Wall Street banks and Chinese financial groups on Wednesday night, according to three people familiar with the matter. One of the people said there were about 12 attendees including executives from BlackRock, Fidelity, Goldman Sachs and JPMorgan.

The call sought to reassure the groups after China issued an effective ban on the country’s $100bn private tutoring industry at the weekend, which led to concerns of a broader regulatory crackdown on Chinese tech companies listed abroad.

News of the call boosted Chinese shares, which had suffered a punishing week amid a slate of regulatory action. The Hong Kong-listed shares of internet groups Tencent and Alibaba jumped 8.4 per cent and 6.7 per cent, respectively, as the broader Hang Seng Tech index rose 7 per cent.

China’s CSI 300 index of Shanghai- and Shenzhen-listed stocks was up 1.5 per cent, while the tech-focused ChiNext index gained 3.7 per cent.

One person briefed on the call hosted by the China Securities Regulatory Commission said it showed that the Chinese government was not “completely tone-deaf to international investors’ sentiment”, but added that it did not do much to assuage concerns about future regulatory policies.

“These policies are not coming from the CSRC, they’re coming from much higher up. It’s clear there will be more to come, that’s obvious to everyone,” the person said.

During the call, CSRC vice-chair Fang Xinghai told the international groups China was committed to allowing companies to access capital markets and that the action on education technology businesses was an isolated situation, according to the person.

The person said that a number of people asked the CSRC about whether regulators would target the “variable interest entity” structure that many large Chinese tech groups have used to list overseas. However, the questions were not answered definitively, the person said.

The new rules on private tutoring companies included restrictions on their ability to use the VIE structure, which has also been used by tech companies including Alibaba and Pinduoduo to list in the US. The structure, which is not legally recognised in China, allows global investors to get around controls on foreign ownership in some Chinese industries.

The latest restrictions on tutoring groups prompted worries that regulators could target the structure more widely.

Fang said he was not interested in talking to journalists when contacted by the Financial Times.

One person close to the CSRC said regulators “didn’t expect the policy to have such a big impact on investor sentiment and [are] keen to send the message that it is business as usual . . . but everyone felt the crackdown is too much and there is no regulatory boundary. Investors will have to reprice China risks going forward”.

Regulatory pressure from Beijing on tech groups has escalated rapidly over the past month. Authorities have initiated an overhaul of how Chinese companies list overseas and the country’s cyber security regulator has announced plans to review all overseas listings of groups with more than 1m users on national security grounds.

The actions have prompted a scramble on Wall Street to redirect IPOs of Chinese companies from New York to Hong Kong. The US has not approved a major transaction from a Chinese group since the Didi episode left global investors nursing large losses.

Tencent spooked markets further on Tuesday when it announced it was suspending user registrations for its flagship WeChat app while it upgraded its security technology to “to align with all relevant laws and regulations”.

Chinese state media has sought to put investors at ease in the wake of sharp falls for shares in Shanghai and Shenzhen. An article on Wednesday by Xinhua said the CSRC maintains an “open attitude” on where Chinese companies list.

BlackRock, Fidelity and JPMorgan did not immediately respond to a request for comment. Goldman Sachs declined to comment.

With additional reporting by Edward White and Ryan McMorrow

Top Stock Picks for the Week of June 17, 2019
How to Play the Pound and UK ETFs Now?
ISM Manufacturing Report Shows New Orders Remain Strong
Gilead’s Stock is on Sale: Should You Buy?
How to Find Unusual Options Activity in ThinkorSwim (Sizzle Index)