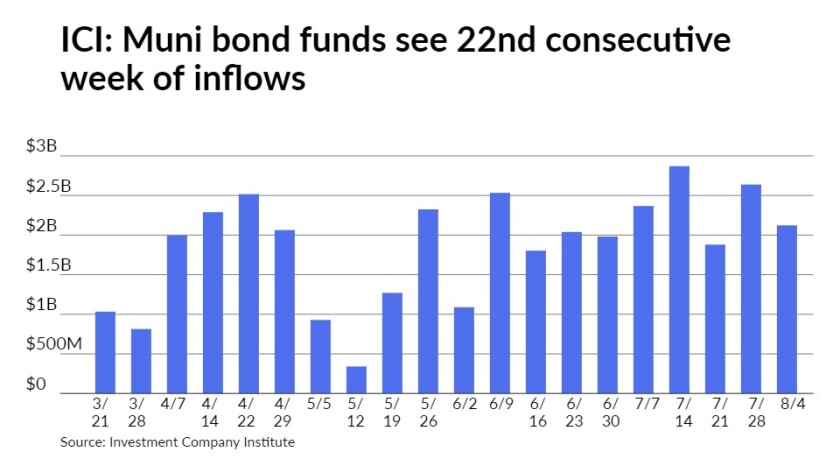 Municipals faced pressure outside of 10 years Wednesday, moving benchmarks on those bonds cheaper by two basis points, while U.S. Treasuries were little changed and new issues showed the spread tightening that continues on sought-after credits.

In the primary, an airport deal out of Pittsburgh saw compelling levels for the sector that has seen spread compression as it rebounds from COVID-related damage. To show the dramatic tightening on the short end, the A2-rated Allegheny County Airport Authority five-year bonds came a basis point richer than the gilt-edged state credit.

Maryland 5s of 2026 were bought at 0.42% Its five-year with a 5% coupon was priced plus four basis points to triple-As while its 10-year maturity of non-AMT bonds was +19 to benchmark yields. Maryland sold $614 million of general obligation bonds to wider spreads than triple-As on some maturities.

Another $2 billion-plus was reported flowing into municipal bond mutual funds in the latest week, continuing to be a supportive demand component for munis.

The Investment Company Institute reported another week of inflows, $2.123 billion for the week ending August 4, down from $2.639 billion the week prior. The fund complex hit its 22nd consecutive week of inflows.

Exchange-traded funds saw a drop to $105 million of inflows versus $623 million the week before.

A view from the buyside
Municipals remain attractive as an asset class, and could potentially outperform Treasuries as the summer comes to an end, depending on changing market technicals, buy-side analysts said this week.

In the near term, summer technicals have generated very visible net negative supply conditions, according to Jeff Lipton, managing director and head of municipal credit and market strategy and municipal capital markets at Oppenheimer & Co.

While municipals continued to show positive performance in July, they underperformed U.S. Treasuries with the year-to-date performance gap through July revealing further tightening from the prior month, Lipton said in a weekly report on Tuesday.

“If we see enduring Treasury market softness over the coming weeks, we believe that summer municipal technicals have the potential to push munis to outperform Treasuries over the near-term,” Lipton wrote.

Even with the elevation to higher yields, municipals remain historically rich to Treasuries, he added.

“If the outlook for the future tax bite stays muted for a while longer and we continue to receive heavier doses of hawkish Fed speak and higher inflation data points, yields may experience continued upward pressure,” he added.

However, Lipton said that scenario would likely be “distilled” given the summer technicals that are generating visible net negative supply conditions.

“We believe that munis still have the ability to generate positive performance, although admittedly such performance could be compromised should technicals become much less constructive and prospects for higher taxes fade considerably — even from currently elevated levels of doubt,” he said.

“While summer technicals should support muni performance, just how munis perform relative to U.S. Treasuries will be largely determined by the Treasury market’s response to Fed-speak and future inflationary data,” he said.

Even without a rise in federal tax rates, municipals should continue to offer “very desirable credit quality and diversification attributes,” which are expected to further entice foreign investment into the asset class, according to Lipton.

“Against this backdrop, we do not foresee a material loosening up in credit spreads or even a substantive reversal in the currently rich muni valuations that have characterized the market for some time now,” he said, adding that when technicals drivers alter course, he will be on the lookout for advantageous investment opportunities ahead.

Meanwhile, in a weekly report Bill Merz, director of fixed income at Minneapolis-based U.S. Bank Wealth Management, said that even though incremental yields over Treasuries on investment-grade corporate and municipal bonds are at or near all-time lows there is still value to be had.

“High-yield corporate and municipal bond yields are also low relative to the past, but can still provide meaningful income,” as well as low default rates for now, to remain low for now, according to Merz, who helps oversee $282 billion in assets under management.

The average seven-day simple yield for the 157 tax-free and municipal money-market funds fell to 0.01% from 0.02% the previous week.

Taxable money-fund assets fell by $4.02 billion, bringing total net assets to $4.355 trillion. The average, seven-day simple yield for the 763 taxable reporting funds fell to 0.01% from 0.03% the prior week.

CPI rises modestly
The Consumer Price Index rose a seasonally adjusted 0.5% in July after rising an unrevised 0.9% in June, while the core rate also jumped 0.3% after a unrevised 0.9% gain in June.

Economists polled by IFR Markets had estimated CPI to rise 0.5% and the core to climb 0.4%.

Economists anticipated an annual increase of 5.3% in CPI and 4.3% in core for the year.

“The CPI report adds credence to the argument that while inflation is high, it likely is at or near its peak,” said Scott Ruesterholz, portfolio manager at Insight Investment. “In particular, we are seeing signs that volatile categories that have driven much of the recent surge in prices, like rental cars and used cars, are moderating in keeping with high-frequency data like used car auctions, which point to normalizing prices.”

Core inflation is “starting to show signs of cooling from the pandemic-induced surge during the spring months, as some of that is due to the emergence of the Delta variant, which could dampen inflation in August,” said Diane Swonk, chief economist at Grant Thornton. “It is notable that the Delta variant is disrupting both supply and demand, which will leave the Federal Reserve uneasy as we move into the turn of the year. The Fed is still expected to taper its asset purchases; timing on rate hikes is still further out.”

The City of Lubbock, Texas (A1/A+/A+/) is set to price on Thursday $254.32 million of electric light and power system revenue bonds. BofA Securities.

The University of North Dakota is set to price on Thursday $130.4 million of certificates of participation. Stifel, Nicolaus & Company, Inc.

Aaron Weitzman contributed to this report.