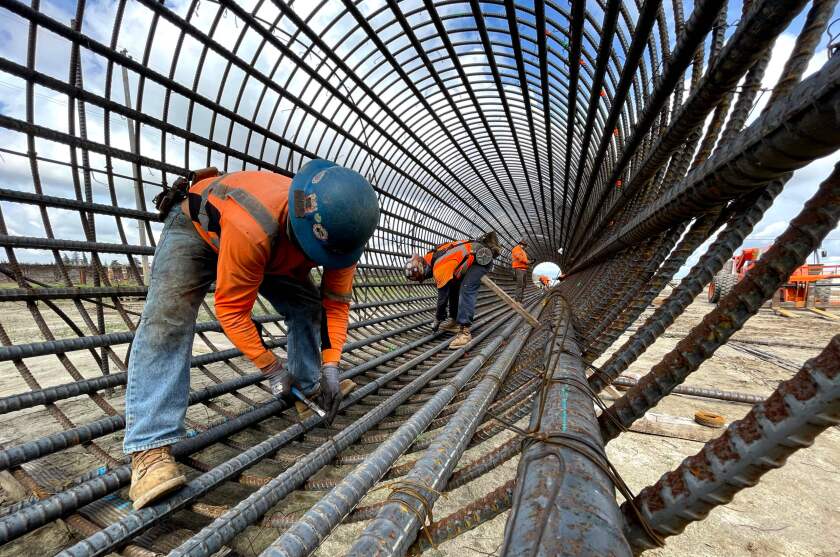 Leaders of California’s high-speed rail project have not given up on garnering additional federal funds to pay for the slow-moving project that is supposed to link the state’s major cities.

High-speed rail, championed by President Joe Biden on the campaign trail, was shunted to the sideline in the $1.2 trillion infrastructure package.

Brian Kelly, chief executive of the California High-Speed Rail Authority, said at Wednesday’s authority board meeting that he has identified six potential programs that will get additional funding from the infrastructure bill, according to the Los Angeles Times.

House Speaker Nancy Pelosi penned a letter to her Democratic colleagues Sunday saying she would not support the infrastructure bill that cleared the Senate if Congress didn’t approve the reconciliation bill in tandem with the $3.5 trillion “social infrastructure” package that no Republicans in Congress support.

State officials who support the high-speed project are tracking discussions in Congress around the “social infrastructure” package for anything rail-related they can tap.

Despite missteps and cost overruns that have pushed cost projections to nearly $100 billion, and lukewarm support even from some Democrats, the project that would connect Los Angeles to San Francisco is moving forward.

The action paves the way for California Environmental Quality Act approval on the full 300 miles of the high-speed rail project’s 500-mile Phase 1 alignment from San Francisco to Los Angeles/Anaheim, according to an authority news release.

“Today’s approval represents another major milestone for this project as we move the project into Los Angeles County,” Kelly said in a statement. “We appreciate the collaboration with our local and regional partners as we work to build a clean, electrified high-speed rail system that will connect our state for generations to come.”

On Thursday, the Authority approved an $18.2 billion plan in a final environmental document for the Bakersfield-to-Palmdale segment.

The board certification of the final environmental document and approval of the Bakersfield to Palmdale Project Section reaffirms the Authority’s commitment to complete the environmental process for the full Phase 1 California High-Speed Rail System from San Francisco to Los Angeles/Anaheim by 2023, the authority said.

In June, the Authority prepared and released the final EIR/EIS as the lead agency for both CEQA and the National Environmental Policy Act.

The next steps under CEQA and NEPA will include issuing a Record of Decision consistent with NEPA requirements and filing a CEQA Notice of Determination.

The high-speed rail project is currently under active construction in the Central Valley along 119 miles at 35 different construction sites with an average of 1,100 workers daily, according to the authority. It was launched in 2008 when California voters authorized $9.95 billion of general obligation bonds.

Republican House leader Kevin McCarthy, R-Calif., said Wednesday he would not support the Senate-passed infrastructure bill, even if it is separated from the larger reconciliation package.

McCarthy attempted to have federal high-speed rail funds diverted to the state’s water projects in 2019.