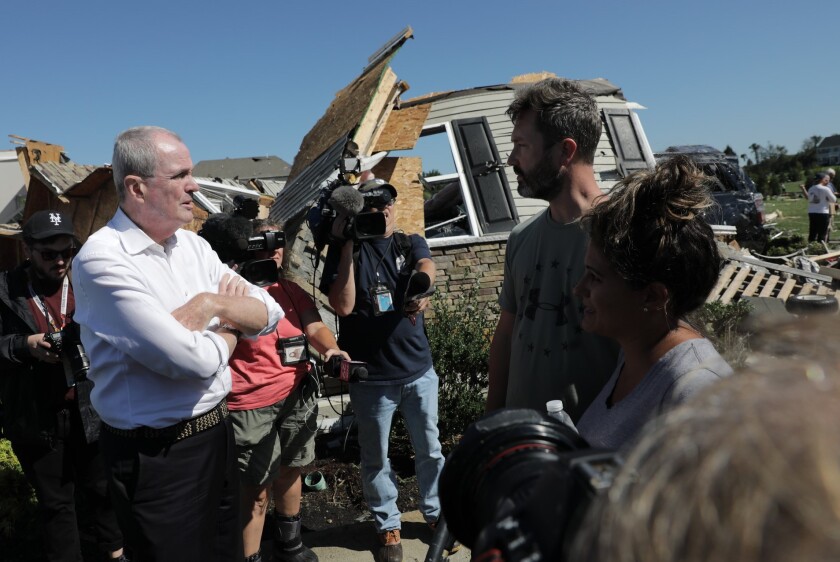 The catastrophic remnants of Hurricane Ida snuck up on Northeast states Wednesday, catching officials and the general population off-guard.

But such a storm, still delivering massive amounts of rain more than 1,300 miles from its Louisiana landfall, is no outlier, one New Jersey climate official warned.

“It may be a different animal, as you put it, but it’s the animal it’s going to be in the future. It’s the baseline for what we have to plan for,” said David Rosenblatt, chief resilience officer and assistant commissioner for the climate and flood-resilience program in the state’s Department of Environmental Protection.

In New York City, flash flooding overwhelmed even one of the city’s highest elevation points, 145th Street in northern Manhattan. There, water gushed into a No. 1 subway station in what looked like a tape delay of recent floods from Tropical Storm Henri.

“We did not know that between 8:50 and 9:50 last night that the heavens would literally open up and bring Niagara Falls level water to the streets of New York,” Gov. Kathy Hochul said in Queens, where at least 11 people died.

“Could that have been anticipated? Is that something we should have known in advance? I want to find out.”

The strength of the rainfall wasn’t a surprise to the National Weather Service, which forecast the severity of the rainfall at the beginning of Wednesday and declared a flash flood emergency for New York City in the evening.

New Yorkers may have lacked context; the weather service had never issued such a flash flood emergency for the city before.

Ida’s weirdness adds yet another layer of complexity to the vexing problem of coping with climate change.

“New Jersey is Ground Zero for some of the worst impacts of climate change, period,” said Shawn LaTourette, the DEP commissioner in the Garden State, whose recent initiatives include Gov. Phil Murphy’s establishment of the Office of Climate Action and the Green Economy, and an April report titled “Climate Change Resilience Strategy.”

The latter called for expanding the availability of related investments from public and private sources.

“Existing options through public banks, appropriations, and bond measures currently provide some funding, but are insufficient to meet the state’s growing need,” it said.

Still, LaTourette warned that no magic bullet exists and that change must be collaborative.

“There is no one single project or array of projects will protect this state or any others from the ravages of climate change,” he said in an interview Thursday. “It would be an error to assume that there is some alignment of flood mitigation projects that will make the damages that we are experiencing right now nothing to worry about.”

The financing industry he added, “should start think about what it is they are financing in the first place,” and approach, for example, high-rise development climate risk as diligently as it would for contamination in brownstone development.

According to LaTourette, experts have predicted a 7% to 11% increase in Garden State precipitation by 2050, and sea-level rise of two feet by 2050 and five feet by 2100.

“That was last night, the remnants of Ida or whatever that meant,” he said.

Overall, at least 45 people along the Eastern seaboard died, including 23 in New Jersey and 11 in New York City’s Queens borough, many from drownings in cars and basement apartments.

Comments by S&P Global Ratings about the effects of municipal credit on Louisiana and Mississippi shortly after Ida struck the Southeast could also apply across geographic bounds.

‘For those issuers with fewer reserves and lower liquidity, the impact could be more direct and the hardest hit can take years to recover,” S&P said.

Damages are expected to cost tens of billions of dollars and in some regions, rivers have yet to crest. Tales of woe in Philadelphia included the spillage of the Schuylkill River onto the Vine Street Expressway in Center City and the flooding of high-speed rail lines in the region. The Manayunk neighborhood, which hugs the Schuylkill, was submerged.

Cities must also prepare to change, said New Jersey’s Rosenblatt. “There’s a tendency for local officials to expect to want everything the same as it looks today.”

Typically, as long as local or state governments declare an emergency and the president signs a similar order, the Federal Emergency Management Agency can then reimburse at 90% of reasonable costs, said Alan Rubin, a principal at Blank Rome LLP and co-head of its severe weather recovery team.

After 90 days a reassessment is done and if the amounts claimed do not cover the actual costs, FEMA adjusters to evaluate the damage and, if appropriate, provide an additional 5% of the extra costs.

Directional Vertical Strategy with Protection from a Shorter Duration Vertical (Members Preview)
My Stock Dropped Over -20% – What Should I Do?
Getting started with dividend investing
Top Stock Picks for Week of February 28, 2022
How to Play the Pound and UK ETFs Now?