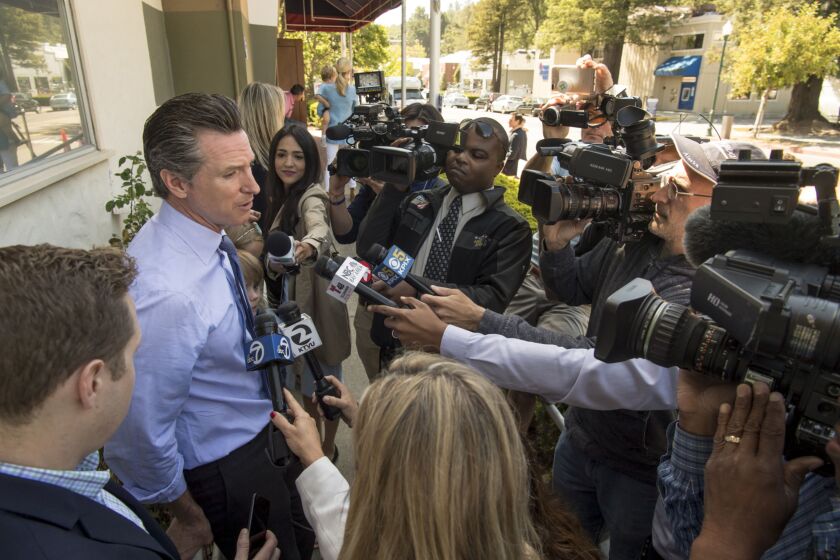 It’s estimated the additional funding could build up to 14,000 housing units for people exiting homelessness, said Newsom, who called it the largest single homeless housing investment in California history.

“We are going all in on solutions that work — tackling the homelessness crisis head-on with a constructive, compassionate approach and a focus on serving those with the most acute behavioral health needs,” Newsom said. “This investment will allow us to build on Homekey’s groundbreaking success — creating more housing, faster and with accountability and efficiency.”

“The pandemic has reinforced what we have long known: the only way to end the homelessness crisis is with more affordable, long-term, and quality housing,” Los Angeles Mayor Eric Garcetti said. “Creative and lasting solutions like the Homekey program will help meet the immediate and critical need for housing today, while giving our unhoused neighbors a path to a permanent place to call home tomorrow.”

The state tops the nation in the number of unhoused people living in the streets.

In March, the U.S. Department of Housing and Urban Development reported that California’s homeless population was at 161,548 people as of January 2020, prior to the pandemic, a 7% increase from 2019. In Los Angeles County, the number jumped 13% over the same time period, to 66,436 by January of 2020.

Newsom, the Legislature and city mayors have been applying a full-court press to the issue. Both Newsom, in his State of the State, and Los Angeles Mayor Eric Garcetti, in his State of the City, ahead of the pandemic — called the state’s housing crisis, the most pressing issue facing the state.

The California Health Facilities Financing Authority won The Bond Buyer’s Deal of the Year award in 2020 for the inaugural $500 million issuance of bonds for its No Place Like Home bond program, the municipal market’s first large bonding program created to invest in homeless housing infrastructure and secured directly by taxes on high-income residents.

The state’s largest cities have also approved billion-plus bond programs over the past few years to try to abate the state’s housing and homelessness crisis.

Homekey prioritizes speed and cost-efficiency by making competitive grants available to local governments across the state, according to the governor’s office.

The funding will expand the program to purchase and rehabilitate buildings, including hotels, motels, vacant apartment buildings, tiny homes and other properties, and convert them into more permanent, long-term housing units for people experiencing or at risk of homelessness.

The California Department of Housing and Community Development (HCD) is today releasing the latest Notice of Funding Availability for local governments to apply for Homekey funding.

“In the middle of a pandemic, California took bold action to protect individuals experiencing homelessness by creating more than 6,000 units of housing with the first round of Homekey funding,” Business, Consumer Services and Housing Agency Secretary Lourdes Castro Ramírez said. “It was the largest single addition of permanent housing in the state’s history, but our work is far from done. With the next round of Homekey funding, the state will continue its work with our local partners to protect vulnerable Californians by providing safe spaces they can call their own.”

Earlier this year, Newsom signed a housing and homelessness funding package as part of his California Comeback Plan, investing $12 billion to tackle homelessness. Of this amount, $5.8 billion — including the $2.75 billion to expand Homekey — will be used for up to 42,000 homeless housing units and treatment beds, with housing options for those with the most acute behavioral health needs.

The additional Homekey funding builds on the first phase investment of $846 million, which resulted in 94 projects in counties and tribal areas across the state that closed escrow last year.

“This administration has set a goal of functionally ending family homelessness in five years, and that’s why investments in programs like Homekey are so critical,” HCD Director Gustavo Velasquez said.

Focus on Consistency NOT on Hitting Home Runs on Your Trades
This Week’s Hidden Gems: (CSTE)(FBHS)- Aug 11, 2016
Here’s Why Chesapeake Energy Shares Were Halted on Tuesday
How many stocks should I buy?
Buy This Cheap Oil Stock for Big Dividends, Value & Upside Potential?