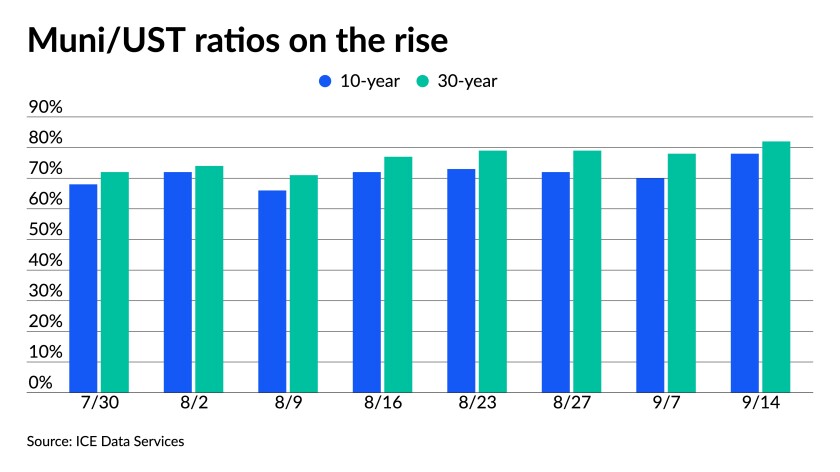 The municipal primary was the focus Tuesday with large deals repricing to lower yields while the secondary market took a backseat with benchmark curves little changed even as U.S. Treasuries rallied and stocks sold off.

Triple-A benchmarks saw a basis point bump in spots while U.S. Treasury yields fell five basis points on the 10- and 30-year near the close.

Ratios rose as a result with the 30-year muni-to-Treasury ratio settling above 80%.

“Today and yesterday there was hardly anything to speak of in terms of customer selling,” aside from a couple of minor bid-wanted lists in the afternoon, a Florida trader said. “With all the new issues in the market this week for accounts to focus on, dealers are not allocating as much resources to the secondary market.”

While municipal yields have barely moved so far in September, the market has been affected “by inconsistent flows in U.S. Treasuries, as driven by the nearing slow down in Fed UST buying, large amounts of corporate bond issuance, and supply-linked price inflation,” Matt Fabian, partner at Municipal Market Analytics, said.

However, “the most important issue for municipals … remains net supply challenges for tax-exempt holders,” he said. Between the beginning of the year to Sept. 30, scheduled tax-exempt maturities and calls were $200 billion, and mutual fund and exchange-traded inflows have been $86 billion year-to-date.

“Together these exceed the $259 billion in gross, YTD tax-exempt issuance, even before current refundings in such are excluded; the product is fewer and smaller reinvestors, likely to the detriment of sector price resilience should conditions turn more meaningfully negative,” Fabian said.

And while the market was focused on Tuesday on the primary, some other participants are still suggesting with this influx of paper, muni yields may face pressure heading into the second half of the month and into year-end.

“We believe municipals may sell off as we head into year end,” Nuveen said in a weekly note. This week’s new-issue calendar is outsized, and there is a good chance that this outsized supply will continue, the report said.

“Tax-exempt rates are not compelling at their current yields. Deals may have to be cheapened to pique investor interest,” John Miller, head of municipals at Nuveen said. “However, we would view any potential short-term increase in tax-exempt rates as a buying opportunity. A large amount of cash and ultra-short tax-exempt bonds continue to wait to be reinvested at cheaper yields.”

Not the case on Tuesday, though.

This week the Index fell to 0.80 after jumping up for one week to 0.90. The Index has remained below the 1.00 level since June 28. The Index has remained below the 13-week moving average for eight of the past nine weeks. The Index, which has fluctuated in the 0.80s recently, has been slowly converging toward its 13-week moving average, which has been declining since May 24.

The Diffusion Index also remains close to, but below, the 12-month trend. A week prior saw a decline from slightly above to once again below the moving average. The signal strength — the total number of mentions, positive and negative readings combined — continues to remain below the strength seen in June of over 20,000 daily mentions.

Inflation
While Tuesday’s consumer price index showed some relief from price pressures and offered some support for the Federal Reserve’s position that it’s temporary, “the inflation story is not over,” according to one analyst.

Calling the numbers “a temporary flattening of inflation at a high level,” Berenberg chief economist for the U.S., Americas and Asia Mickey Levy, a member of the Shadow Open Market Committee said they offer “some relief to the Fed.”

Although, he cautioned one month does not guarantee anything. “The future trajectory of inflation depends on the pace of aggregate demand in the economy, how long supply constraints persist, and how higher inflationary expectations influence price and wage setting behavior,” Levy said. “We anticipate inflation will remain elevated.”

Economists polled by IFR Markets expected the headline number to increase 0.4% and the core to climb 0.3%.

The “soft” read “again gives the Fed more time to decide when to taper,” said John Farawell, head trader and EVP at Roosevelt & Cross. “It seems the Delta variant continues to challenge economies both here and globally.”

The slowing of inflationary increases, he said, “may give credence to the transitory inflation argument … the stronger UST 10-year at a 1.27 acknowledges this.” But economic data will determine the Fed’s actions, Farawell said. “With the Delta variant so paramount, it seems like this is all they can do.”

The increase in the headline number was “the smallest monthly gain in seven months, suggesting price pressures may be starting to ease,” said Scott Anderson, chief economist at Bank of the West

And while this is “welcome news, consumer inflation is expected to remain elevated through the first quarter of 2022 on a year ago basis, before easing further in the second half of 2022,” he said.

Although inflation cooled somewhat in the month, Stifel Chief Economist Lindsey Piegza said, “We’re still a ways away from achieving the Fed’s more benign inflation goal, particularly with some companies suggesting further price increases are coming down the pipeline as we head into the end of the year.”

She agreed, the “report is a small victory for dovish policymakers who have remained steadfast in their message of inflation-dismissal and hesitant to insist a rollback of emergency measures is needed.”

But, Ed Moya, senior market analyst for the Americas at OANDA, said, “It looks like the Fed may have gotten inflation right.”

Should this report be the beginning of a slowdown, it “could be what is needed to justify their taper delay and suggests they have a couple more months to see how the labor market recovery unfolds.”

Market expectations, he said, are drifting toward a December taper announcement.

“Used car and truck prices declined 1.5%, a positive sign that the global chip shortage might be easing a little bit,” Moya added. “This inflation round easily went to team transitory as indexes for airline fares, used cars and trucks, and motor vehicle insurance all declined over the month.”

The cooling appears to be partly related to the Delta variant, according to Grant Thornton Chief Economist Diane Swonk, “but the level of prices remains extremely elevated, especially for big-ticket items.”

Also of concern, she said, “the basics of food and energy costs are also elevated, which is crimping consumer budgets.” These numbers will be more comforting to the Fed “than most consumers,” she said.

Also released Tuesday, small business optimism rose in August, with half of the components of the NFIB optimism index higher in the month, although fewer respondents expect conditions to improve in the next half year.

“As the economy moves into the fourth quarter, small business owners are losing confidence in the strength of future business conditions,” according to NFIB Chief Economist Bill Dunkelberg. “The biggest problems facing small employers right now is finding enough labor to meet their demand and for many, managing supply chain disruptions.”

The California Municipal Finance Authority (//A-/) is set to price on Thursday $120 million of HumanGood senior living revenue bonds. Ziegler.

Christine Albano contributed to this report.