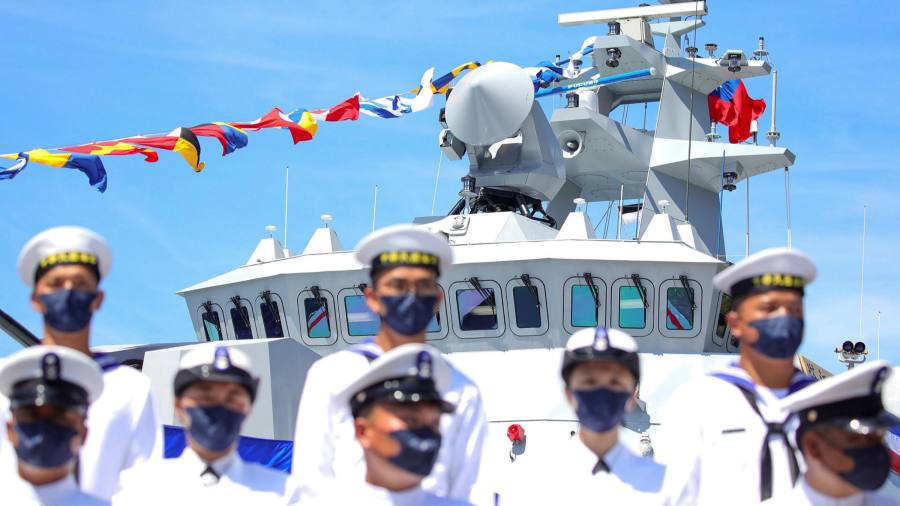 Taiwan and Japan have hailed the potential for a new security pact between Australia, the UK and US to offset an increasingly assertive China, even as France reacted with fury to Canberra’s cancellation of a $90bn submarine programme to agree the deal.

The US allies said the new AUKUS partnership, under which Canberra will procure nuclear-powered submarines, marked a greater commitment to regional security in the Indo-Pacific region.

Describing the agreement as the biggest initiative in Australian defence policy since its alliance with the US in 1951, Scott Morrison, prime minister, said it was a “forever partnership . . . between the oldest and most trusted of friends”.

As part of the pact, Australia will scrap a programme to buy 12 conventional submarines from France that was signed in 2016. Instead it will procure at least eight nuclear-powered submarines, which are faster, quieter and can operate over longer ranges.

Officials in Taipei, which is on the frontline of tensions between Washington and Beijing, said the pact would help balance China’s growing military strength and assertiveness.

“Keeping the Indo Pacific free and open is not just important for the security of neighbouring countries like Taiwan, it’s essential for today’s interconnected global economy,” said Kolas Yotaka, spokesperson for Taiwan’s president Tsai Ing-wen. “So broader involvement by members of the international community is a positive and necessary trend for peace and stability in the region.”

A Taiwanese national security official welcomed the shift in Australian strategy. “The creation of AUKUS fills the most important gap in the security web of the entire western Pacific,” the official said.

Taro Kono, a former Japanese foreign and defence minister and a leading candidate to succeed Yoshihide Suga as prime minister, said Tokyo also had to partner with allies to address China’s military expansion.

“We very much welcome that the UK is once again turning its eyes to the Pacific region,” Kono told reporters on Thursday. “It is extremely important for Japan to work closely with these three countries.”

China has rapidly modernised its military over the past two decades and used the People’s Liberation Army’s capabilities to assert territorial claims and threaten several of its neighbours.

Chinese military aircraft fly almost daily incursions into the air defence identification zone of Taiwan, which Beijing claims as part of its territory and threatens to invade if Taipei refuses unification indefinitely.

Beijing has also built and militarised artificial islands in the South China Sea and used its coastguard, military and maritime militia vessels to harass fishing vessels and resource exploration ships from other littoral states.

The Chinese coastguard has frequently operated within the 12 nautical mile-zone off the Senkaku Islands, the archipelago controlled by Japan but also claimed by Beijing.

A person familiar with the discussions said Australia had pushed Washington to provide the nuclear propulsion technology and that the initiative was not proposed to Canberra by the Biden administration.

A second person familiar with the situation said Washington and Canberra had both notified France ahead of the decision. But Paris reacted bitterly, highlighting the risk that Washington was offending one ally to draw closer to another.

“This decision is contrary to the letter and spirit of the co-operation that prevailed between France and Australia,” said Jean-Yves Le Drian, the foreign minister, and defence minister Florence Parly, adding that it reinforced the need to establish an autonomous European strategy.

“The American choice to exclude a European ally and partner such as France . . . shows a lack of coherence that France can only note and regret.”

The Chinese embassy in Washington criticised the pact, saying the western nations should not build “exclusionary blocs targeting . . . the interests of third parties” and calling on them to “shake off their cold war mentality and ideological prejudice”.

Jacinda Ardern, the prime minister of New Zealand, insisted the pact would not undermine arrangements such as the Five Eyes intelligence-sharing partnership, which includes New Zealand and Canada as well as the AUKUS countries.

“No, we weren’t approached but nor would I expect us to be,” said Ardern. “This is not a treaty-level arrangement. It does not change our existing relationships including Five Eyes or our close partnership with Australia on defence matters.”

In line with New Zealand law, she added, the nuclear-powered Australian submarines would not be allowed to enter New Zealand’s waters.

By Robin Harding and Kana Inagaki in Tokyo, Demetri Sevastopulo in Washington, Kathrin Hille in Taipei and Anthony Klan in Sydney

Johnson & Johnson and General Motors | Two Growth and Income Stocks | July 19
Iron Condors: 101 What is it and How Does it Make You Money?
Buy This Cheap Oil Stock for Big Dividends, Value & Upside Potential?
My Stock Dropped Over -20% – What Should I Do?
Here’s Why Chesapeake Energy Shares Were Halted on Tuesday