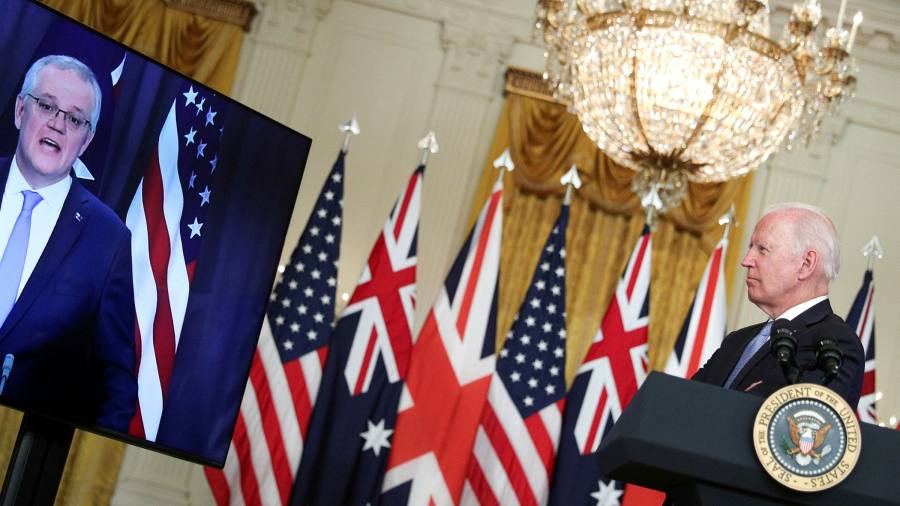 Australia has been thrust into the limelight after signing a trilateral defence partnership with the US and the UK that is set to provide its navy with nuclear-propelled submarines.

But the intention behind Aukus goes far beyond those submarines and Australia. The new pact is an essential building block in Washington’s attempts to prevent China from gaining military primacy in the region, according to military officials and analysts.

“There is a real effort to enhance allies’ capabilities and exploit as much as possible new relationships to increase the reach for the US,” said Alexander Neill, an expert on Asian security affairs who runs a strategic consultancy in Singapore. “It means integrating your friends and allies into your battlespace and posing a deterrence to the likes of China through force multiplication. That’s what Aukus is.”

China’s growing arsenal of missiles aimed at US bases in Japan, Guam and its warships, Beijing’s budding electronic warfare and space force and its growing submarine fleet have undermined the American military’s ability to operate freely in Asian waters and airspace.

For more than a decade, US policymakers and military officials have been discussing how to counter the erosion of its power as the People’s Liberation Army has expanded capabilities. Some initial steps included changes to the Marine Corps’ operations, the creation or expansion of air strips on Pacific islands, such as Midway, and the rotation of Marines and Air Force assets through northern Australia.

But Aukus could take these efforts much further. “I think it does fill gaps in the US’s military power in the region: we are now engaging in very serious alliance strengthening with Australia, and that comes in the context of the US investing a lot more in the Quad,” said David Santoro, president of the Pacific Forum, a Hawaii-based think-tank, referring to a partnership between the US, Australia, India and Japan that the Biden administration has enlisted to help counter Beijing.

Two Asian military officials said they expected a Quad summit next week would strengthen the US commitment to deeper defence co-operation. “We are moving towards a situation where different partners take charge of patrolling different sectors of the sea, and that will optimise the use of the limited assets we have,” one said.

Washington and Canberra said on Thursday they would expand the rotational deployment of US military aircraft in Australia and extend this co-operation to servicing American naval vessels in the country. The governments also said they would conduct more integrated exercises and operate jointly with other allies and partners in the region.

The Biden administration launched a force posture review in February to determine what changes are needed to the US military’s presence, resources and strategies around the globe. Experts believe the initiatives agreed under Aukus may be the first results of that process.

“This may be the start of the rollout of the implications of that review. I suspect that is likely to be the context,” said Euan Graham, a senior fellow for Asia-Pacific security at the Institute for International Strategic Studies, a think-tank in Singapore.

At the heart of the US’s new strategy is an approach called Integrated Deterrence, whereby it ties its forces and those of allies and partners closer together and relies more heavily on them. This allows for operations closer to Chinese territory but in some cases also shields US assets from attack.

“Australia is not just a political ally, it is in a convenient location, outside the envelope of all but China’s longest-range missiles,” Graham said.

“The US could potentially base strike assets there and do what it did in the early 1940s,” he added, in a reference to the US and Australia fighting Japan together during the second world war. “Technology changes a lot, but geography doesn’t change.”

The US Air Force’s rotational deployments in Australia include bombers capable of carrying anti-ship missiles, which can put Chinese Navy ships across the region at risk. Analysts believe that the US Navy will also request access to the HMAS Stirling base in Perth for its nuclear-propelled submarines. Cocos Island, an Australian territory in the Indian Ocean, is suitable for monitoring approaches from the west into the disputed South China Sea.

Equally important in the growing competition between the US and China is support from allies in the Pacific. Defence experts see Aukus as part of a broader US push into Oceania, where Australia has long been the dominant power. This comes as Chinese naval and maritime research vessels are making forays ever closer to Guam, where the US keeps its submarine fleet for the region.

The tighter integration of US and allied forces through Aukus is set to vastly complicate strategic calculations for Beijing.

“Think of the dilemma that China faces if Australian military communications and surveillance satellites are sharing information with the US and the UK in a conflict, and China has to decide whether to hit them,” said Drew Thompson, a visiting fellow at the National University of Singapore and a former Pentagon official.

Thompson equates such a situation to the dilemma China would face in a war over Taiwan: to hit Kadena, the US air base in Japan, to block fighters from coming to Taiwan’s defence but risk Tokyo entering the conflict.

“Aukus is part of a tremendous resiliency initiative that brings all sorts of escalation dilemmas for China,” he said.

Video: What does a Biden presidency mean for China?

This article has been amended to reflect the fact that Australia is beyond the range of all but China’s longest-range missiles.

This Week’s Hidden Gems: (CSTE)(FBHS)- Aug 11, 2016
How You Can Make Money with Options and Still Stay SAFE
How to Find Unusual Options Activity in ThinkorSwim (Sizzle Index)
Here’s Why Chesapeake Energy Shares Were Halted on Tuesday
Iron Condors: 101 What is it and How Does it Make You Money?