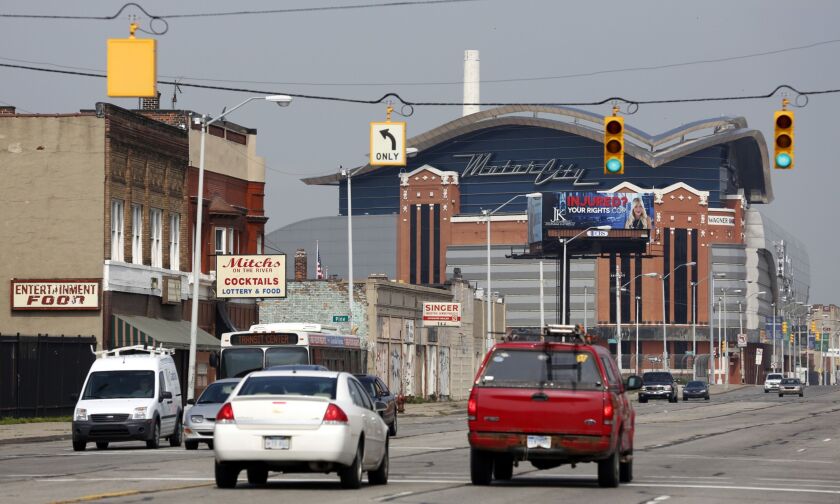 Rebounding casino and new online gambling tax revenues will give Detroit’s general fund a boost this year and in the coming ones as it tackles looming pension contribution pressures.

The city’s estimating conference revised general fund projections for the fiscal 2022 which began July 1 to $1.1 billion from $995 million thanks mostly to $66 million more in gambling revenues now expected.

The forecast also raised projections for fiscal 2023 through fiscal 2026 by about $75 million annually from the February estimates primarily due to the new internet gambling and sports betting options that took effect in January.

The city also expects to close the books on fiscal 2021 with $999 million of revenue in hand, up from $848 million projected last February.

“This increase in our revenue base is evidence of a resilient economy in Detroit,” Jay Rising, the city’s chief financial officer, said in a statement. “As we implement our plan to invest federal pandemic recovery funds to bolster Detroit’s future and as we maintain financial responsibility for our budget, the city will strengthen its structurally balanced four-year financial plan.”

State aid levels mostly hold steady and property taxes rise slightly. The city expects its income tax take of about $250 million to $300 million annually to suffer roughly $50 million hits through the next few years due to remote work by non-residents, a trend sparked by the COVID-19 pandemic that is likely to outlive it.

Increased gambling revenues “will help offset the expected continuation of reductions in city income tax revenues from nonresidents continuing to work remotely through hybrid work models or full-time remote work,” the city said in a statement. “Without the new gaming revenue, the city’s revenue forecast would still be below pre-pandemic levels.”

The city remains on course to close out fiscal 2022 with a $107.3 million budget reserve. Last year it planned to draw down $50 million to help cover the pandemic’s fiscal wounds but restored it in the current budget. Officials doubled the 5% of expense target to 10% of expenses in fiscal 2020.

Under state law, the city conducts a biannual, independent revenue conference in February and September with the numbers guiding the city’s budgeting practices and its four-year fiscal plan.

Members who must sign off on the projections include Rising, Michigan Department of Treasury economist Eric Bussis, and George Fulton, director emeritus of the University of Michigan’s Research Seminar in Quantitative Economics or RSQE.

Federal aid also has helped the city recover from the pandemic. The city council approved Mayor Mike Duggan’s outline for use of the city’s $826 million share of the American Rescue Plan Act. It allocates $400 million to restore budget shortfalls.

The other $426 million goes to a Detroit Future Fund that would fund community investments, including allocations toward jobs, small businesses, housing support, home repair, neighborhood initiatives, employment services, and addressing the digital divide.

The city’s economy is mending quicker than expected on the jobs front, according to an outlook first published in August and reviewed at the conference Wednesday. The forecast is prepared by the City of Detroit University Economic Analysis Partnership, a collaboration of economic researchers at Wayne State University, Michigan State University, and the RSQE at the University of Michigan.

The city earlier this year received clearance from the Detroit Financial Review Commission to operate independent of direct state oversight for a fourth year but pension funding loom large as potential threats to the city’s future fiscal solvency.

The city’s Chapter 9 restructuring plan that allowed it to exit bankruptcy in December 2014 requires the independent estimates, a four-year fiscal plan, and a mandate to keep the city’s books balanced. The city operates on a roughly $2.3 billion budget with a $1.1 billion general fund.

Pension pressures loom large. The city’s Retirement Protection Fund, known as the RFP, held $234 million at the end of March and the city aims to bring it up to $365 million to help the city cover roughly $202 million of pension contributions that resume in 2024.

Contributions were put on hold to give the city breathing room after the bankruptcy and the special trust fund was put in place but based on current projections it will help the city only through fiscal 2027 when it is exhausted.

The city issued $80 million of general obligation debt last October for public safety, recreation and transportation projects, marking its second stand-alone deal to sell without support since emerging from bankruptcy. The city returned in February with a $175 million stand-alone GO issue under a $250 million blight removal bond program approved by voters last November.

The city has won a series of upgrades since emerging from Chapter 9 but its ratings remain speculative grade. Ahead of a recent $175 million general obligation sale for blight removal, S&P returned the outlook on its BB-minus rating to stable from negative. Moody’s Investors Service rates the city Ba3 with a positive outlook.