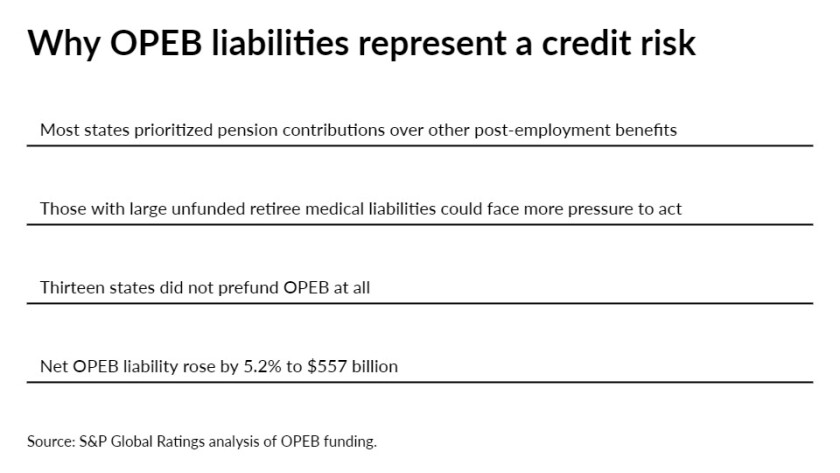 S&P Global Ratings has singled out states’ underfunding of retiree medical benefits as a key credit risk for states.

During the economic expansion preceding the pandemic, few states pursued and implemented reforms aimed at reducing growing unfunded OPEB liabilities, according to the report.

“Across the 48 states that report a liability for retiree medical benefits, the aggregate proportionate share of the net OPEB liability rose by 5.2% to $557 billion,” S&P analysts wrote. “Among the states with funded ratios below 40%, 29 were below 10% funded, with 13 states having no prefunding at all.”

OPEB is drawing more attention; in August, Moody’s Investors Service analysts published a report that said OPEB had surpassed both pensions and debt as an issue for 1 in 10 state and local governments.

Though states are at higher risk from OPEB liability then pensions currently, because most fund OPEB on a pay-go basis as opposed to prefunding, they have more flexibility to deal with OPEB then pensions because of regulatory restraints around pensions, said Todd Kanaster, an S&P director specializing in public pensions, and Jillian Legnos, a credit analyst for states, who co-authored the report with four other analysts.

Some states, including Georgia, Texas and North Carolina, have even made decisions to just scrap the benefits for certain employees, Kanaster and Legnos said.

There wasn’t a big push to pre-fund OPEB even before the pandemic, Legnos said.

“Some had started talking about it,” she said. “But with COVID-19, it just got put on the backburner.”

In general, she said, there just has not been a broad push across the states to reform OPEB.

“For a lot of states, the cost is a small portion of their budget, they are just dealing with other healthcare costs,” Legnos said. “In that case, where it is a small liability on their books, they aren’t prioritizing it. In states where it is a larger liability, you see more action.”

Retiree medical benefits are more complicated than pensions, and the reporting standards are newer, Kanaster said.

In Illinois, the state Supreme Court has said the state must pay retiree medical benefits, but they are still figuring out what the ruling means, Kanaster said. And in some states the benefits have zero protection, he said.

“This is a growing problem, so at some point the states are going to need to address it, and will be looking at all solutions,” he said.

“We have seen a couple,” Kanaster said. “POBs and OPEB obligation bonds are one option. We don’t view all POBs as negative or positive, it really depends on the issuer.”

This Week’s Hidden Gems: (CSTE)(FBHS)- Aug 11, 2016
How You Can Make Money with Options and Still Stay SAFE
Here’s Why Chesapeake Energy Shares Were Halted on Tuesday
Iron Condors: 101 What is it and How Does it Make You Money?
Buy This Cheap Oil Stock for Big Dividends, Value & Upside Potential?