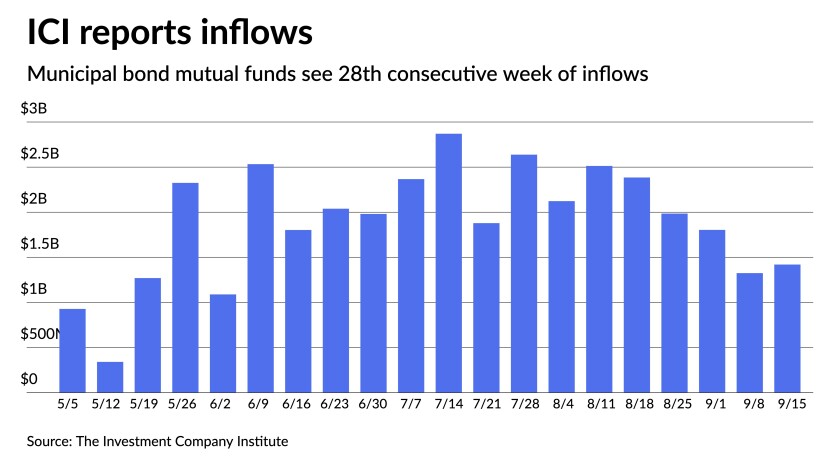 The news was largely expected and U.S. Treasuries ended the day a touch firmer while equities made up for lost ground though pared back earlier gains.

“The biggest news out of this meeting was the change in FOMC projections, with most members now seeing a first interest rate hike in 2022, which is faster than many market participants had previously anticipated,” said Mike Fratantoni, the Mortgage Bankers Association’s chief economist.

The theme for municipals — strong demand, steady inflows, supply constraints, improving credit — was reinforced by the Investment Company Institute reporting $1.420 billion of inflows for the week ending Sept. 15, following $1.325 billion of inflows the prior week.

It brings the total inflows to $74 billion year-to-date. Exchange-traded funds saw $510 million of inflows after $250 million a week prior.

If participants are waiting for ratios to return to the 90%, 100%, above-100% days, they may be waiting for quite some time. Municipals simply are operating in their own space for various reasons, including less tax-exempt paper because of taxable refundings, a need for tax shelter income and the mounds of cash still sitting on the sidelines.

“Heading into the final quarter of the year, municipals are not immune to inter-market forces, but there is a certain insular nature that is holding a very narrow trading range,” Olsan said.

She noted the 10-year AAA has traded within a one basis point range all month while U.S. Treasuries have moved up and down as much as seven.

“The remaining days of the month and end of the quarter are bringing an uptick in bid list volume (although smaller percentages are trading) and a flurry of deals but without much impact on generic yields,” she said.

Taxable money-fund assets rose by $8.73 billion, bringing total net assets to $4.37 trillion. The average, seven-day simple yield for the 765 taxable reporting funds sat at 0.02%, same as the prior week.

FOMC: taper coming
While the FOMC’s decisions to leave the Fed funds target rate unchanged and to consider tapering were widely expected, the change in the interest rate outlook surprised most analysts.

“As expected, the Fed has left rates unchanged and, as expected, the Fed looks to taper in the near future. Chairman [Jerome] Powell recognizes stronger inflation and acknowledges that we could see a Fed liftoff in 2023 based on their tests,” said John Farawell, head trader and EVP at Roosevelt & Cross.

“The next Fed meeting should give us a better idea on their path to normalcy. The chairman will closely monitor unemployment and the continued challenges of COVID on our economy,” Farawell said. “We continue to hear words like, ‘may’ and ‘we shall see,’ so again, there is never a certainty of future events. As always, watch the bond market and its performance. Since the Jackson Hole speech, the 10-year is at 1.31%, which is virtually unchanged. Next meeting may bring more volatility.”

The change in the Dot plot was noted by many.

“While they still expect inflation to come down next year, the Dots show that the FOMC is now split down the middle on whether rates will need to rise next year — this is quite a big change since the June projections when the majority view was that rates would stay on hold next year. The inflation surprise is changing the tone of the policy debate,” said Brian Coulton, chief economist at Fitch Ratings.

He added that the taper statement had been expected.

“This seems to confirm expectations that they will taper asset purchases in November and do not see the rise in COVID-19 cases as a reason to delay. There has been a very substantial upward revision to their near-term inflation forecasts and inflation is now described as ‘elevated.’”

Taper is coming, many say.

“The September FOMC statement added the expected hint that a near-term tapering of the Fed’s monthly asset purchases of U.S. Treasury bonds and mortgage backed securities is still on-track, despite recent stock market volatility and the negative economic impacts of the Delta variant spread,” said Scott Anderson, chief economists at Bank of the West Economics. “I think the official announcement of the taper will likely occur at the upcoming Nov. 3 FOMC meeting. With the Fed currently purchasing $120 billion in assets a month, we are looking for a $15 billion reduction in monthly asset purchases when the taper commences, taking about eight months to complete.”

He also noted the Fed is also shifting toward an earlier start to fed funds rate hikes and a faster pace of rate hikes in 2023 and 2024 than previously projected in their dot plot back in June.

“The rate hike schedule implied by the dot plot appears a bit too aggressive in my view, and while we will be further reviewing our Fed funds rate and interest rate projections in light of today’s FOMC meeting, at this point we would still not expect any Fed rate hikes in 2022 and maybe two quarter-point rate hikes in 2023 and 2024,” Anderson said.

MBA’s Fratantoni said the tapering start looked to be on schedule.

“To paraphrase Chekov, if at the September meeting the Fed lays out a tapering plan, they must use it in November. There would need to be a significant negative surprise in the incoming data for them to delay,” he said. “The job market has improved, inflation is running hot, and supply chain constraints are persisting. As a result, it is not surprising that the Fed will begin to remove accommodation.”

The Fed’s patience was cited by some.

“It is important to emphasize while the Fed is preparing to phase out its asset purchase program, members are exceptionally patient. Even though they raised their inflation forecast from 3.4% to 4.2% in 2021 and from 2.1% to 2.2% in 2022, the majority of members are still not forecasting a rate hike until 2023,” said Scott Ruesterholz, portfolio manager at Insight Investment. “Indeed, the Fed is expecting inflation to run above 2% through 2024 even as they keep rates below their neutral 2.5% estimate. That shows how committed they are to fostering as strong of a labor market recovery as possible.

“Even when they begin raising rates, which we expect to start in early 2023, it will be a gradual lift-off with rates expected to stay below 2% through 2024 even as unemployment drops below the pre-COVID 3.5% level. This is a patient, data-dependent Fed that will do everything it can to aid the labor market, so long as inflation permits. If inflation proves stickier, it is possible lift-off could occur in 2022 while unforeseen speed bumps could delay it. Policy is not on a pre-set course.”

Some saw the Fed statements as being rather murky.

“In a phrasing even the notoriously opaque Alan Greenspan would admire, Fed Chair Jerome Powell and company managed to meet the market’s expectations with a nod toward normalizing monetary policy in the near future … without necessarily committing to starting the process at its next meeting in November,” said Matt Weller, global head of market research at StoneX’s Retail Division, Forex.com

“Beyond the aforementioned taper hint, there was only one noteworthy tweak to the Fed’s monetary policy statement: The committee inserted a nod to the impact of COVID-19 cases slowing the recovery in certain sectors. Needless to say, this minor update was not a meaningful market mover,” he said.

He noted the FOMC’s quarterly economic projections statement was interesting.

“The closely scrutinized ‘dot plot’ of interest rate projections showed an even split between Fed officials (nine) who see interest rate liftoff in 2022 and those who see it later than that (nine, with eight of those projecting the first interest rate hike in 2023).”

Jay Hatfield, founder and portfolio manager at Infrastructure Capital Advisors, agreed the Fed statement was as expected. Still, he noted that the dot plot was better than expected.

“We believe that the Fed has lost control of inflation, particularly in the housing sector with housing prices up 18.6% and rent rising over 10% year over year, which is the highest level since the late 1970s,” he said. “The market, however, is likely to interpret the overall release as slightly dovish and hold today’s rally that was ignited by reduced fear of contagion from China’s Evergrande.”

In his press conference after the meeting, Fed Chair Jerome Powell said that many see the labor market meeting the substantial further progress test while some do not. He thinks it’s all but met, but may come as early as its next meeting on Nov. 2-3.

In economic news Wednesday, the National Association of Realtors reported existing home sales for August fell 2% to 5.88 million from 5.99 million in July. Year-over-year, sales were down 1.5% from 5.97 million in August 2020.

Each of the four major U.S. regions saw declines in both month-over-month and year-over-year.

“Sales slipped a bit in August as prices rose nationwide,” said NAR’s chief economist Lawrence Yun. “Although there was a decline in home purchases, potential buyers are out and about searching, but much more measured about their financial limits, and simply waiting for more inventory.”

“A lack of supply continues to plague the market … The limited inventory and still-solid demand drove the median home price up 14.9% year-on-year to $356,700. While year-on-year price gains are still robust, they have moderated for three consecutive months. We expect home price growth to slow further over the balance of this year and through 2022 as the housing inventory shortage eases and demand moderates,” said Bank of the West’s Anderson.

“Moving into the fall we continue to expect to see year-over-year declines in home sales related primarily to a return to normal seasonal patterns,” said Ruben Gonzalez, chief economist at Keller Williams. “This is a result of the base-effect created by the abnormal surge in home sales we saw in late Q3 and Q4 of 2020.”

He said the fundamentals behind housing demand remain strong looking at the rest of 2021 and into 2022.

“Home prices remain our primary source of concern as affordability becomes an increasing challenge, particularly for first time home buyers who have not had the opportunity to benefit from the wealth created from recent surges in home equity,” Gonzalez said.