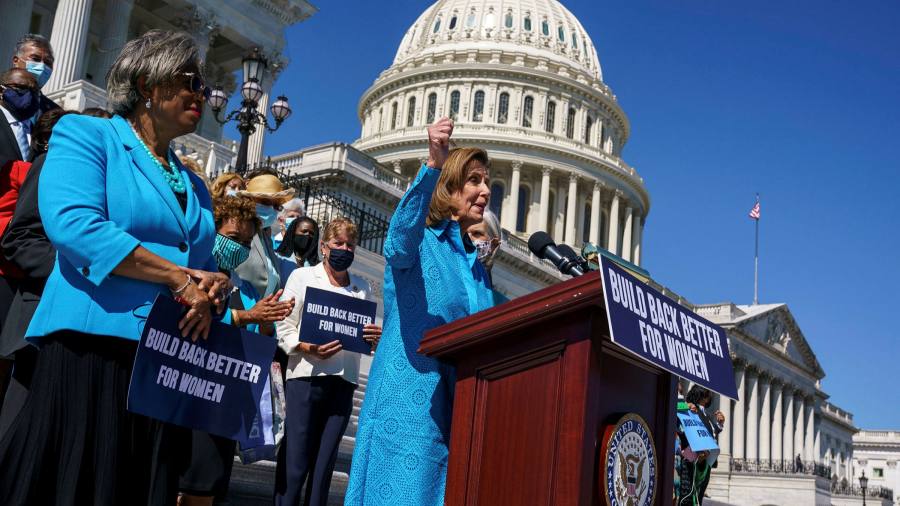 US president Joe Biden and congressional Democrats are gearing up for a frantic dash to pass their multitrillion dollar economic agenda, avert a debt default, and salvage their worsening prospects in the 2022 midterm elections.

Eight months after he entered the White House, Biden must overcome a series of hurdles in the coming weeks if he is to fulfil key campaign promises and stem a steady fall in his approval ratings.

On the domestic front, the White House and congressional Democrats are divided in their negotiations over Biden’s $1.2tn bipartisan infrastructure bill and plans for a $3.5tn investment in the social safety net. A split between moderate and progressive Democrats over the details of tax increases and the scope of the spending proposals has threatened to derail the centrepiece of Biden’s plans for the world’s largest economy.

The president late Friday held a call with House speaker Nancy Pelosi and Senate majority leader Chuck Schumer, and vowed to “stay in touch” with the two top Democrats on the issue over the weekend. Pelosi told Democratic lawmakers on Saturday that she wanted the infrastructure package and the budget bill passed by the end of the working week, saying: “The next few days will be a time of intensity.”

Pelosi has called for Democratic House members to meet Monday evening, when tensions within the president’s party are likely to be laid bare.

At the same time, the clock is ticking on a possible budgetary crisis if no agreement is reached by Friday to keep the government funded. Failure to raise the debt limit could lead to a federal shutdown or, more dangerously, could cause the Treasury to run out of cash and default on its obligations as early as mid-October.

In the midst of it all, Biden has been struggling to contain the fallout from a new surge in migrants from Haiti at the southern border, the chaotic withdrawal from Afghanistan — which will be the subject of congressional hearings next week — and the confusing rollout of Covid-19 boosters, which has clouded confidence in Biden’s ability to tackle the pandemic.

“I think it’s understandable people being frustrated . . . frustrated by, you know, ‘I thought this was going to be better. I thought everything was working out’,” Biden admitted on Friday in remarks from the White House.

Democratic political strategists and lawmakers have been concerned that Biden’s falling approval ratings could hurt their party’s chances of retaining control of Congress next year. Although Democrats were comforted by Governor Gavin Newsom’s comfortable victory in the California recall election this month, there are growing fears that the party could lose the Virginia’s governors race in November if the political mood continues to sour for their side.

Schwerin believes that an agreement in Congress on Biden’s economic legislation will ultimately be struck. “There will be negotiations until the last minute, and it will be in doubt — until it happens,” he said.

But economists and investors are starting to fret more about the extended stalemate in Washington.

The White House and top congressional Democrats have pushed for a deal on both the infrastructure bill and the $3.5tn budget package by early next week. But Joe Manchin, the centrist West Virginia Democratic senator who has proven to be a thorn in the side of the administration, told Politico in an interview published on Saturday that he saw no rush, saying: “What’s the need? There is no timeline.”

Meanwhile, as the federal government careens towards a possible shutdown, Democrats and Republicans are at a stalemate over raising the debt limit. Democrats have insisted that any effort should be bipartisan, while Mitch McConnell and Senate Republicans have steadfastly refused to sign on, and insisted that Democrats go it alone.

“In the near-term, fiscal policy failures represent a significant risk to our economic outlook,” warned Nancy Vanden Houten and Gregory Daco of Oxford Economics in a note on Friday.

Janet Yellen, the US treasury secretary, has billed a failure to lift the limit on federal borrowing a “catastrophe”. On Friday, the Bipartisan Policy Center, a Washington think-tank known for analysing the government’s cash flow, sharpened its own estimate of a possible default to between October 15 and November 4.

Failure to reach a resolution by that point would not only risk the government missing critical payments including military paychecks and retirement benefits, said Shai Akabas, director of economic policy at the Bipartisan Policy Center, but also economic chaos.

Wall Street heavyweights Beth Hammack of Goldman Sachs and Brian Sack of the DE Shaw Group, who lead a US government advisory group, also warned of “significant disruptions” to the $22tn Treasury market, which serves as the bedrock of the global financial system, and renewed doubts about the creditworthiness of the US.

Fed chair Jay Powell also weighed in to caution against any assumptions the US central bank would be able to “fully protect” financial markets or the economy more broadly in the event no resolution is reached.