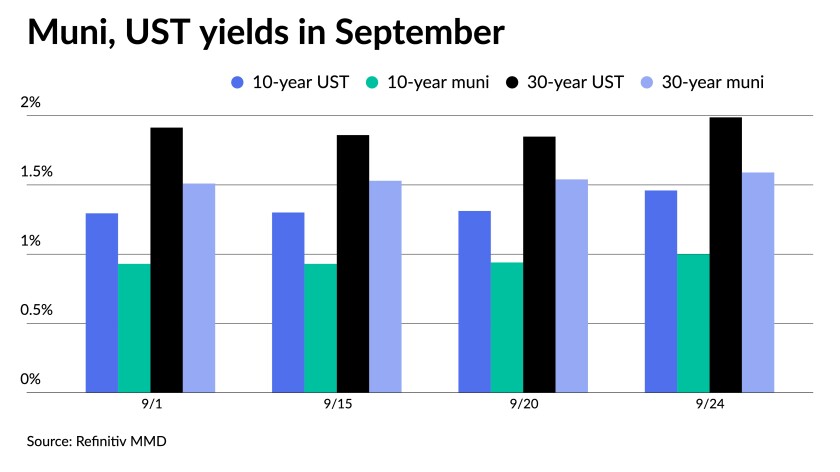 Municipal yields edged higher Friday as selling pressure emerged early and buyers greeted it by demanding some concessions, though municipals still outperformed taxables by a large degree on the week.

Triple-A benchmark yields rose another two to three basis points, moving the municipal 10-year to 1% on both Refinitiv MMD and ICE Data Services scales. The last time the 10-year was at 1% or above was June 29 at 1.01% and it fell as low as 0.81% in mid-July, according to Refinitiv MMD data.

Secondary trading was choppy but the prints clearly showed a bias toward higher yields. Short-end selling moved the one-year yield to 0.11% and 0.12% on benchmark scales after trading a week ago had it trading as low as 0.06%.

The 10- and 30-year UST yields rose 15 and 14 basis points, respectively, since Monday while municipals have risen less than half of that.

“After the post-Fed rate selloff, tax-exempts were able to hold their ground relatively well — bending but not breaking — with muni-UST ratios collapsing in a hurry,” according to a weekly report from Barclays. “However, if rates remain under pressure, at some point tax-exempts will have to follow. We expected September’s muni performance to be relatively subdued, and it is definitely turning out to be this way thus far, with both [investment-grade] and [high-yield] returns close to zero for the month.”

“Going into October, we are getting somewhat concerned about the near-term market outlook, as historical muni performances have been much more challenging around this time of the year, especially for high-grade tax-exempts,” Barclays strategists Mikhail Foux, Clare Pickering and Mayur Patel wrote in the report. “Moreover, supply is typically quite heavy in October, and this year will likely not be an exception.”

They also noted that policy-related concerns related to tax reform and the debt ceiling will add to uncertainties and pressure. On top of that, “possible rate volatility, which could have a negative effect on fund flows and investor appetite in general; and lack of dealer appetite for risk in early Q4 after a profitable year all point to possible challenges for municipals ahead.”

In general, they said they are “not overly concerned, as we see this as a temporary dislocation; if the muni market does sell off in the next 4-6 weeks, we would view it as an attractive medium-term buying opportunity.”

Supply is growing leading into the final week of September and the quarter end. Thirty-day visible supply is $15.31 billion.

The total potential volume for the final week of the quarter is estimated at $11.398 billion with $9.434 billion of negotiated deals and $1.964 billion of competitive loans.

Debt ceiling near
With the debt ceiling limit near, analysts expect a brief government shutdown, but the municipal bond market could benefit, and a closure would be done before the Federal Reserve announces its taper plans, so those would not be impacted.

It appears the Democrats will have to raise the debt limit on their own, said Wilmington Trust Chief Investment Officer Tony Roth. “There is a good chance for a government shutdown at the end of the month” with no bipartisan agreement to increase the debt limit, he said.

Scott Ruesterholz, a portfolio manager at Insight Investment, agrees. “Unless Democrats agree to separate government funding from the debt ceiling, there could be a partial government shutdown at the start of October.”

But the muni market is not concerned about a shutdown or default, Wilmington’s Roth said. “I don’t think the market is pricing in a chance of default.”

A shutdown, he suggested, could lead to an increase in muni purchases in a flight to safety.

The lack of bipartisan agreement on the debt ceiling could hurt business and consumer confidence, said Dec Mullarkey, managing director, investment strategic research & initiatives at SLC Management, which could “spill over to the labor market.”

Not raising the debt limit before it’s reached “could significantly tighten financial conditions, particularly with tapering in the queue,” he said. In 2011, a default was days away, Mullarkey said, “and financial markets tightened significantly as risk premiums jumped.”

Should the limit not be raised by November, he added, “that materially changes the tapering calculus for the Fed. It will likely be forced to delay until an agreement is in place. Stable financial conditions are critical to the Fed and anything that amplifies broad market uncertainty, makes it cautious.”

And while a shutdown is possible, Insight’s Ruesterholz said, “Our central case is narrowly for no shutdown, but the risk of a brief one is significant and rising.” He said a debt limit hike is unlikely before mid-October. “As such, market nerves could well be frayed for almost another month. The potential for increased market volatility will rise as this timeframe narrows.”

But, previous shutdowns, he said, had “limited market impacts.”

Should the stalemate be prolonged, with the debt ceiling “not raised before the Treasury’s cash holdings run out, potentially toward the end October, Ruesterholz said, “It could cause a technical default and lead to severe market disruption.”

While it “will likely go down to the wire,” Edward Moya, senior market analyst for the Americas at OANDA, said, “expectations are still optimistic that Republicans won’t want to take the blame for sending the economy immediately into a recession and as that could trigger millions of jobs lost and wipe out $15 trillion in wealth.”

Interactive Brokers’ Chief Strategist Steve Sosnick said, “As of now I am not confident that Congress can get any of the spending and debt bills across the finish line ahead of their deadlines.” He sees a 50%-75% chance “of a government shutdown once the debt ceiling is reached,” but, “I can’t imagine that even the most recalcitrant senators will allow the government to default. That would indeed be the nuclear option, and it was never triggered even during prior shutdowns.”

And investors, he said, agree, “which is why the short end of the curve and equities have barely budged.”

Sosnick foresees a shutdown of a week or two. “I think there will be some short-term angst, and there may be some resulting spillover effects that have a temporary but meaningful impact upon the economy, but ultimately things will get back to normal (whatever that means).”

The prospects for the infrastructure deal, he said, are not good, “at least not in its current form.” So there could be “some potential hiccups in markets — including munis,” Sosnick said, “but little lasting damage.”

On Friday, two Federal Reserve Bank presidents, who will be Federal Open Market Committee voters next year, pushed for tapering.

Cleveland Fed President Loretta Mester said, in her opinion the economy has made the substantial further progress needed “and I support starting to dial back our purchases in November and concluding them over the first half of next year.”

But, she added, “The start of asset-purchase tapering should not be taken as a signal that the FOMC plans to raise the fed funds rate any time soon.”

However, she sees “conditions for liftoff of the fed funds rate will be met by the end of next year,” although accommodative policy will be needed for some time.

Still, predictions can be wrong, Mester noted. “If we have learned anything over the past 18 months, it is that things can evolve very differently than anticipated. In these unprecedented times, the uncertainty around any economic forecast — including my own — is particularly high. Uncertainty will remain very high until the path of the economy can be decoupled from the virus.”

Meanwhile, Kansas City Fed President Esther George said, “In my view, the criteria for substantial further progress have been met, with inflation running well above our target and the unemployment rate at 5.2%, down 1½ percentage points relative to December. Under these conditions, the rationale for continuing to add to our asset holdings each month has waned and signaling that we will soon consider bringing our asset purchases to an end is appropriate.”

While “the economy has not returned to normal,” George said she’s not sure “what normal will end up looking like.”

And with the Delta variant raging, the return to normal may take longer she said, “rather than upend the process altogether.”

Also, George said, unemployment rates may not “be the best guidepost in the current expansion,” if COVID proves to have “resulted in a number of structural changes in the labor market. These changes could affect the assessment of maximum employment in ways that are not yet clear.”

The Maryland Department of Transportation (Aa1/AAA/AA+) is set to sell $138.415 million of consolidated transportation bonds, refunding series 2021B at 11 a.m. Wednesday.

The Maryland Department of Transportation (Aa1/AAA/AA+) is set to sell $295 million of consolidated transportation bonds, Series 2021A at 10:30 a.m. Wednesday.

Iron Condors: 101 What is it and How Does it Make You Money?
How You Can Make Money with Options and Still Stay SAFE
This Week’s Hidden Gems: (CSTE)(FBHS)- Aug 11, 2016
My Stock Dropped Over -20% – What Should I Do?
Focus on Consistency NOT on Hitting Home Runs on Your Trades