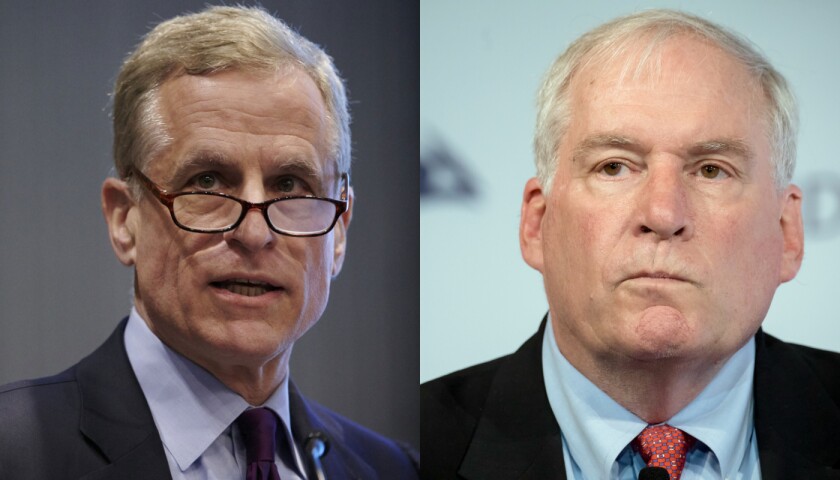 WASHINGTON — Robert Kaplan, the president of the Federal Reserve Bank of Dallas, announced that he would step down next week, just hours after Boston Fed President Eric Rosengren said he would resign.

Kaplan said Monday afternoon he wanted “to eliminate any distractions” at the Fed after it was revealed that he had engaged in certain trading activity last year while privy to the central bank’s internal discussions about its coronavirus response.

Rosengren, whose personal investments also came into question after the Wall Street Journal reported both his and Kaplan’s financial disclosures, said Monday morning that he will step down this week — nine months earlier than planned — due to a health condition.

“The Federal Reserve is approaching a critical point in our economic recovery as it deliberates the future path of monetary policy. Unfortunately, the recent focus on my financial disclosure risks becoming a distraction to the Federal Reserve’s execution of that vital work,” Kaplan said in a statement, noting that his investing activities met the Fed’s compliance rules and standards.

Kaplan said he would resign effective Oct. 8. Rosengren said his last day would be Sept. 30. Rosengren also revealed that he was suffering a kidney condition, which has worsened in the last year.

Both Rosengren and Kaplan said Sept. 9 that they would sell all of their individual stock holdings to address conflicts of interest concerns. A week later, Fed Chair Jerome Powell announced the central bank would review its ethics rules in light of the controversy.

“We need to make changes and we’re going to do that as a consequence of this,” Powell said during a press conference last week. “This will be a thoroughgoing and comprehensive review. We’re going to gather all the facts and look at ways to further tighten our rules and standards.”

Powell added that he was not aware of Rosengren and Kaplan’s trading last year that raised the questions about conflicts of interest.

Rosengren, who has served as head of the Boston Fed for 14 years, was tasked with administering one of the central bank’s COVID-era lending vehicles, the Main Street Lending Program, last year. The $600 billion program was intended to boost bank loans and provide a lifeline to small and midsize businesses that suffered during the coronavirus pandemic.

Under Rosengren’s leadership, the Boston Fed was also active in researching central bank digital currency. The regional bank embarked on a joint venture with the Massachusetts Institute of Technology to study how a digital dollar would work in practice.

That project is still ongoing along with the central bank’s development of the FedNow instant payments service, which is being led by Kenneth Montgomery, chief operating officer at the Boston Fed. After Rosengren departs this week, Montgomery will assume the role of interim president and CEO of the Boston Fed. Dallas Fed Chief Operating Officer Meredith Black will become interim president after Kaplan resigns.

“It has been an honor to serve at the Federal Reserve System, in a job where one can be constantly engaged in pursuing the economic and financial well-being of the country and New England,” Rosengren said in a statement. “I know that my colleagues will build on our progress, and continue making a difference for the public we serve.”

Iron Condors: 101 What is it and How Does it Make You Money?
My Stock Dropped Over -20% – What Should I Do?
Focus on Consistency NOT on Hitting Home Runs on Your Trades
How to Find Unusual Options Activity in ThinkorSwim (Sizzle Index)
How You Can Make Money with Options and Still Stay SAFE