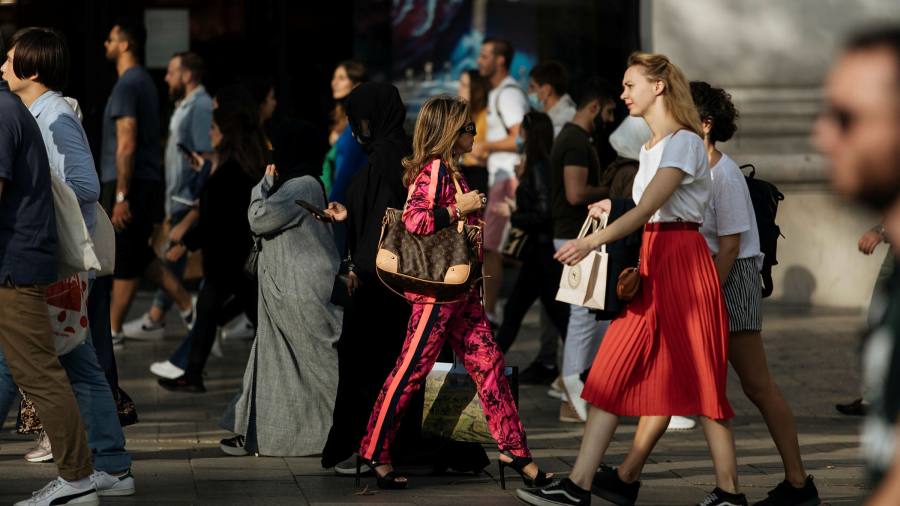 Europeans are leaving their houses to go shopping, eat out, travel and visit cinemas as much as they did before the pandemic, in a sign of returning consumer confidence which suggests that the eurozone’s economic rebound remains intact, for now.

Some of the rebound is because of schools reopening and workers returning to offices. This is reflected in use of airports and domestic public transport in the eurozone, which reached their highest level in September than at any time since the pandemic erupted in early 2020, according to Google Mobility data and the Apple mobility report.

But a continued increase in shopping trips, eating out or going to the cinema also “suggests consumers are now more confident”, said Marion Amiot, senior economist at credit rating agency S&P. Cinema box-office revenues have already returned to pre-pandemic levels, according to data from boxofficemojo.com.

Policymakers increasingly monitor these non-standard economic measures, such as mobility indicators, for a timely, although less comprehensive, snapshot of economic activity than official data.

September’s rise in consumer confidence comes amid a continuing fall in Covid-19 infections and a doubling over the past three months of fully vaccinated people. As of mid-September, nearly two-thirds of the eurozone’s population had received two jabs.

“Our recovery tracker posted a strong gain in the first half of September, rising by a cumulative 2.3 points to a new pandemic high,” said Nicola Nobile, economist at the consultancy Oxford Economics. “The tracker gained solid momentum.”

As consumption accounted for 1.9 percentage points of the eurozone’s 2.2 per cent growth in the second quarter, Chiara Zangarelli of Nomura expects the bloc’s so-far speedy economic recovery to continue, and forecasts a 2.3 per cent expansion in the third quarter. The OECD also recently updated its eurozone economic forecast for this year.

But it is not all good news, and eurozone growth could slow over the coming months.

China’s economic slowdown may yet hit exporters. International travel is still about 30 per cent below pre-pandemic levels. Supply-chain snags have hit manufacturers hard, as seen in an unexpectedly sharp drop in recent business sentiment surveys.

German truck mileage data, which are seen as a proxy of industrial activity, also remain at this year’s lows. And the eurozone’s recovery remains behind the US and China, whose economies have already reached their pre-pandemic levels.

In the meantime though, an OECD weekly tracker of economic activity, which uses real-time high-frequency indicators, rose above 2019 levels at the beginning of September in most eurozone countries.

This may give the European Central Bank confidence that it can scale back its emergency pandemic programme of asset purchases next year, said Marchel Alexandrovich, economist at investment bank Jefferies, who forecasts that the eurozone economy will return to its pre-pandemic level over the next two quarters.

But, as Christine Lagarde, ECB president, said this month, the eurozone was “not out of the woods” yet and uncertainties about the future were rising.

Iron Condors: 101 What is it and How Does it Make You Money?
Focus on Consistency NOT on Hitting Home Runs on Your Trades
How many stocks should I buy?
How to Find Unusual Options Activity in ThinkorSwim (Sizzle Index)
Here’s Why Chesapeake Energy Shares Were Halted on Tuesday