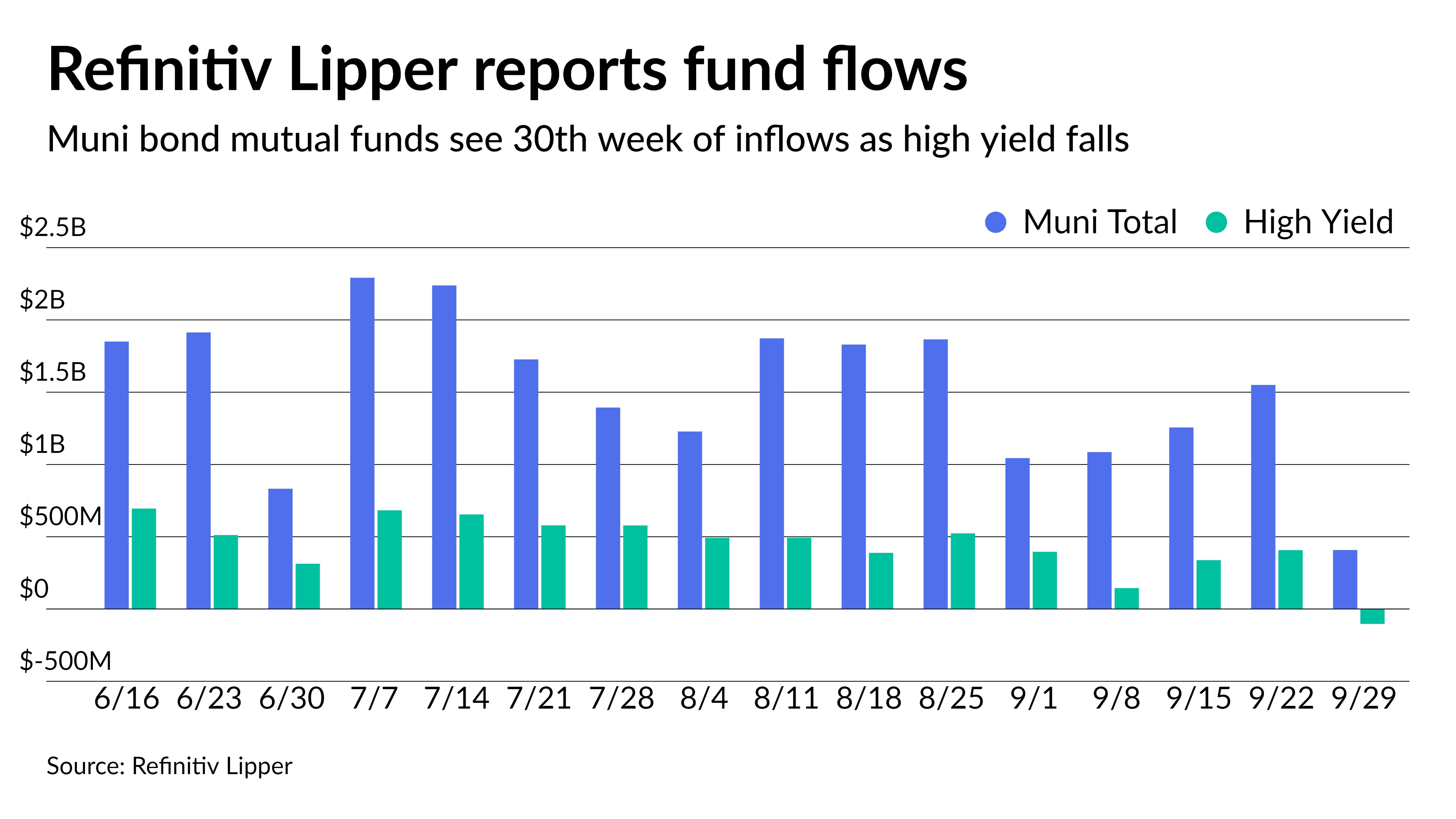 Municipals were little changed with a softer tone Thursday while municipal bond mutual funds saw a drop in inflows to $408 million and high yield saw its first outflows since March 3.

The lower inflows and high-yield outflows can be tied to the correction over the past week and may point to uncertainty from retail investors over broader market volatility.

Since the correction took hold a week ago, the 10-year AAA spot has settled around 1.11%-1.13%, 17 to 18 basis points above where it was a week ago. Yields in both UST and triple-A munis are at levels near or above where they landed after the last sell off in March.

U.S. Treasuries and equities have been volatile and stocks were mixed again Thursday with the Dow Jones Industrial Average off over 500 points. The 10-year UST stood at 1.502% near the close.

Barclays also priced $134.17 million of taxables for the Municipal Electric Authority of Georgia. Details were not yet available.

The four-week moving average remained positive at $1.075 billion, after being in the green at $1.234 billion in the previous week.

In late trading, Treasuries yields fell as equities sold off.

Labor market challenges
Despite the belief that reopening of schools and the end of the added unemployment benefits would result in a labor market surge, the latest initial jobless claims figures suggest otherwise.

“For anyone who thought the hiring challenges would disappear when the COVID-era unemployment insurance programs ended, this should be a wake-up call,” said Luke Tilley, chief economist at Wilmington Trust. The third consecutive weekly increase in claims, he said, indicates “ongoing challenges in the labor market.”

The data “was very noisy and unlikely to change any expectations on the direction of the labor market recovery, pricing pressures, and supply chain worries,” said Edward Moya, senior market analyst for the Americas at OANDA.

“The eye-catching number was the 6.2 million drop in people participating in all unemployment insurance (UI) programs,” he said. “Now only 5.02 million Americans are participating in UI benefits, which could mean millions of Americans will be incentivized to return to the workforce.”

“Today’s report gives us the first indication of impacts from ending of the Pandemic Unemployment Assistance and Pandemic Emergency Unemployment Compensation programs,” Wilmington’s Tilley noted. And while more than six million people have recently lost benefits as a result, “We have not yet seen evidence that these individuals have returned to the labor market en masse.”

Next week’s employment report could offer a glimpse into whether some of these people started looking for work. “We do expect an uptick in labor force participation in that report,” Tilley said, “but not a massive surge as many people are still facing challenges with child care, elder care, and may be reticent to return to work for fear of getting sick.”

Mark Hamrick, senior economic analyst at Bankrate, said the unemployment rate may dip, but job growth is expected to be “restrained.”

“There’s no doubt that the surge in the Delta variant, global supply chain issues and the mismatch between available (and not available) workers and a record number of job openings are all conspiring to produce a situation unlike we’ve experienced before,” he said.

Additionally, the end of benefits earlier this month may have been a factor in recent weak consumer confidence reads. While the declines have been attributed greatly to the rise in COVID cases, Wilmington’s Tilley said, “we should not be blind to the fact that 6.2 million people (equivalent to 3.8% of the labor force) stopped receiving government benefits this month and that could weigh on confidence.”

And while Wilmington remains optimistic about the outlook in general, third quarter consumer spending should be “very weak.”

Also released Thursday, the final second quarter gross domestic product was revised up a tick to 6.7% growth from the previous estimate, after 6.3% growth in the first quarter. Economists expected it to hold at 6.6%.

Finally, the Chicago Business Barometer fell to 64.7 in September from 66.8 in August. Economists expected a 65.0 level.

The biggest decline among the five main figures was in order backlogs, which slumped to 61.1 in the month from 81.6 a month earlier as a result of supply issues.

The report suggests most firms “have had to modify their supply chain strategy,” OANDA’s Moya said.

Common investing mistakes – part 3
Getting started with dividend investing
My Stock Dropped Over -20% – What Should I Do?
Top Stock Picks for Week of February 28, 2022
Directional Vertical Strategy with Protection from a Shorter Duration Vertical (Members Preview)