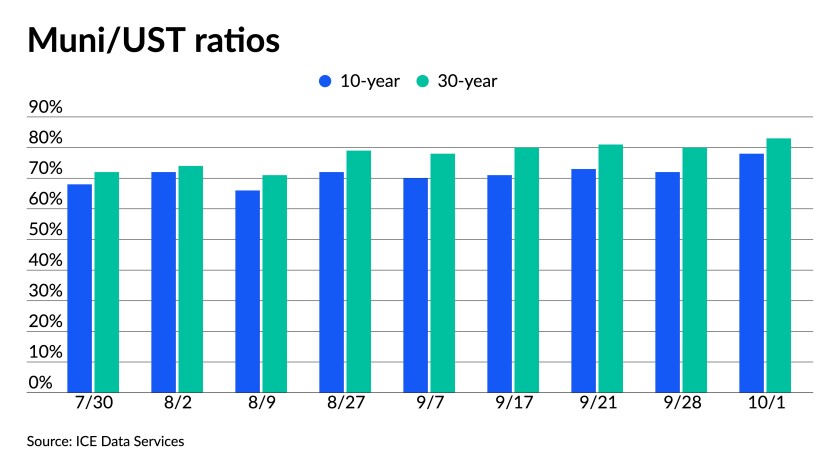 The municipal secondary was quiet after a volatile week that moved municipal rates higher and ratios into a range that investors say are a more satisfactory level to engage in the asset class following months of stagnant rates.

Triple-A benchmarks were little changed Friday while U.S. Treasuries ended the week at lower yields — sub 1.5% on the 10-year — than the highs reached on Tuesday and Wednesday.

“When Treasury yields move higher, tax-exempts follow,” Barclays strategists wrote in a Friday market comment. The yields of both investment-grade and high-yield indexes “have meaningfully increased (high grade tax-exempts have underperformed a bit more thus far) with their yields getting close to their early spring highs, while dropping their total returns for the year to sub-1%,” Barclays strategists said.

“These moves support our view that the talk of tapering would drive rates up while the actual tapering should trigger a prolonged market rally,” BofA said. “At this point, although Treasury rates are still quite far from their late-March 2021 peaks, muni rates are closing in on their March peaks due to relatively higher muni/Treasury ratios this round.”

Ratios have moved into a higher, more favorable range, especially in the belly of the curve. The 10-year municipal-to-UST ratio is at 77% and the 30-year at 82%, according to Refinitiv MMD and ICE Data Services. The five-year ratio sits at 60% after hovering around 50% or less for months.

“For the muni market in the near-term, keep an eye on 10-plus year muni/Treasury ratios,” BofA said. “If these ratios cease to rise and start to decline while Treasury rates rise further, that would suggest the spike of muni AAA rates is not far from completion.”

The municipal calendar is building, led by taxables and refundings after they dropped significantly in September. Without the certainty of Washington reinstating exempt advance refundings and the still historically low rates, issuers that may have been sidelined are adding to supply with taxable offerings.

“Not surprisingly for this time of the year, supply has been steadily inching higher, and visible supply is at the highest point since last December, mainly driven by taxable issuance which is at its highest point in nearly a year,” Barclays noted. “We are not worried about a spike in taxable issuance, as there is always enough global demand to absorb additional supply, especially at higher yields, but tax-exempt issuance has also been increasing, and in conjunction with other factors, some pressure on munis has started to build.”

Actual volumes should be “significantly higher than these” when 4Q is finished, as 4Q21 coupon payments total $32 billion.

“If mutual funds continue to receive inflows at the $10 billion per month pace so far this year, 4Q21 total demand would be approximately $147 billion, roughly in balance with our issuance expectations,” BofA said.

Yet, with the relatively high cash levels for many institutional and retail portfolios, BofA expects munis to outperform Treasuries in 4Q21.

“Moreover, we must note that a much higher percentage of principal redemptions are from tax-exempt bonds, while in the new-issuance market, taxable bonds now account for more than 20% constantly,” they said. “So, demand for tax-exempt bonds in 4Q21 should exceed tax-exempt new issuance by a large margin.”

As for taxable bonds, they said, “foreign buyers and some other corporate bond buyers represent new additional demand.”

“Higher issuance is in general a good factor in the muni market. In contrast, lackluster issuance paces, such as in July and August, actually did nothing to bulls or bears, as price discovery became less efficient,” the strategists said. “The muni market simply did not move much at all for those two months.”

BofA believes that 10-year AAA rates around 1.20% “represent a good entry point to the high-grade market.”

“Now that credit spreads have been so tight, the whole market across the credit spectrum appears to be set up for a rates trade for much of 4Q21,” they said.

The calendar includes $3.06 billion of new money and $1.99 billion of refundings and reofferings in a mix of exempt, taxable, AMT and a private placement.

The sales are broken down into $4.08 billion for October, of which $2.26 billion is new money and $1.82 billion which is either refundings or reofferings and $967 million for November, with $796 million of new-money bonds and $171 million of refunding bonds. No issuance has been scheduled for December.

“Consumer spending went from being a driver to a drag on overall growth in the third quarter,” said Grant Thornton Chief Economist Diane Swonk. “Inflation has a price. Overall GDP growth looks like it slowed to about a 3% pace during the quarter, less than half the 6.7% pace we saw in the second quarter.”

After release of the personal income and spending report, Morgan Stanley lowered its GDP forecast for the third quarter to 4.5% from 5.7%.

“Consumers have been struggling to grow their spending in the face of nearly-bare dealer lots and retail shelves, rising prices, and fears of the Delta variant,” said Scott Anderson, chief economist at Bank of the West.

Noting drops in consumer confidence during the past few months, he said, “consumers could remain cautious in the spending over the holidays, despite record high household wealth and plenty of excess savings to sustain their spending should they choose to do so. Supply chain bottlenecks, and major delays at the ports could further dampen consumers’ ability to spend significantly more even if they wanted to.”

And incomes are likely to take a hit when the September numbers are released, as the $300 a week supplemental unemployment payment ended.

Economists polled by IFR Markets expected income to gain 0.3% and a 0.6% increase in spending.

Economists expected a 0.2% gain in the monthly numbers and a 3.5% jump year-over-year.

Anderson called the numbers “mildly encouraging on the surface.”

The rift between the growth in income and spending, Anderson said, indicates consumers are using savings or government aid to back their purchases.

“We are likely to see more normal rates of consumer spending growth going forward,” he said.

“There is evidence demand and supply pressures are contributing to cost and price pressures: the prices index rose to 81.2, with 70% of respondents reporting higher prices,” he said.

Wells Fargo Securities senior economist Tim Quinlan and Economist Shannon Seery said, “The message from today’s ISM is that supply chain issues have gone from a problem to a crisis.”

The manufacturing PMI rose to 61.1 in September from 59.9 in August.

“The top drivers” of the increase, they said, “were longer wait times for supplier deliveries and sharply higher prices paid.”

And while the index topped expectations, Quinlan and Seery said, “it is not all good news when you examine the underlying components” which show a rise in the supplier delivery index. “Ordinarily a modest wait is consistent with a fast-growing economy. However, today it says more about the supply chain crisis.”

The prices index rose. The employment climbed back into expansion territory, “but it has hovered around the 50-breakeven point for much of the past year as businesses struggle to find the help they need,” they said. “The lack of labor and inputs is causing logistic problems and limiting the pace of production. It’s also leading to significantly higher costs.”

University of Michigan’s final September consumer sentiment index was 72.8, up from 71.0 at mid-month and 70.3 in August.

Economists expected the headline index to hold at 71.0.

Separately, construction spending was flat in August after a 0.3% gain in July.

Jessica Lerner and Chip Barnett contributed to this report.

My Stock Dropped Over -20% – What Should I Do?
Buy This Cheap Oil Stock for Big Dividends, Value & Upside Potential?
Here’s Why Chesapeake Energy Shares Were Halted on Tuesday
How You Can Make Money with Options and Still Stay SAFE
Johnson & Johnson and General Motors | Two Growth and Income Stocks | July 19