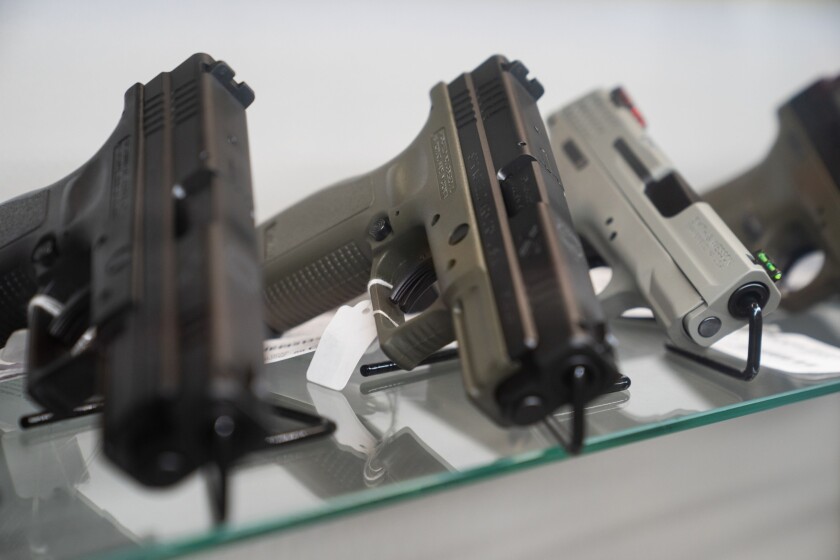 Top bond underwriters are backing away from Texas after they were targeted by a law to protect the firearms industry.

Three of the state’s top five underwriters in the first half of 2021 — JPMorgan, Citi, and Bank of America — accounted for $6.4 billion of deals, according to Refinitiv. Those firms and Wells Fargo were identified as targets of the legislation in state House debates in May.

JPMorgan, which ranked first with $2.5 billion, said it would halt underwriting duties after the law took effect.

Senate Bill 19, signed into law by Republican Gov. Greg Abbott, requires banks and other businesses to sign a statement that they do not discriminate against the firearms industry in order to do business with the state or local governments. The law took effect Sept. 1.

Since then, JPM, Citi and BofA have not managed a single municipal-bond sale in the state and have no deals in Texas scheduled.

Data suggest 118 bond sales from Texas issuers totaling $3.52 billion have been brought to market since Sept. 1.

“While we believe our business practices should permit us to certify, the legal risk associated with this ambiguous law prevents us from bidding on most business right now with Texas public entities,” said Trish Wexler, spokeswoman for JPMorgan Chase.

Citi, which was top senior manager of deals in Texas for three years in a row, also said it would step back from the state.

“While we are dedicated to staying involved in the Texas market and serving our public sector clients, we have elected not to engage in primary market underwriting temporarily as we work through the certification process,” said Citi spokesman Scott Helfman.

BofA had not returned requests for comment by publication time.

In pitching Senate Bill 19 Texas Republicans depicted the firearms industry as a victim of overzealous corporate policies in the wake of numerous mass murders throughout the nation. Gun manufacturers and lobbyists were described as advocates of civil rights under the Second Amendment of the U.S. Constitution.

Republican sponsors said in their analysis of SB 19 it was necessary to “ensure that any company in Texas with a policy that attempts to restrict gun or ammunition sales will not be allowed to benefit from tax dollars through state contracts.”

Under pressure from the public to do something to stop frequent massacres with rapid-fire weaponry, banks began to take positions on lending to the weapons industry in 2018.

Bank of America said it would stop making new loans to companies that make military-style rifles for civilian use.

Although the slaying of 17 people at Marjorie Stoneman Douglas High School in Parkland, Florida, was cited as the key event, it was one of many. After the massacre of 61 people at a concert in Las Vegas in 2017, Citi opposed the use of so-called “bump-stocks” that increase the rate of fire of semi-automatic weapons.

Texas massacres included the 2019 murder of 23 people at an El Paso Wal-Mart and the murders of 26 people at Sutherland Springs Baptist Church in 2017.

Some in the municipal bond industry fear that SB 19 could be exploited in a year of political campaigns.

“The concern is that bonds of Texas have to be approved by the attorney general’s office,” said Kevin Twining, co-chair of Locke Lord’s public finance group in Dallas. “The law requires the firms to make a representation that they do not discriminate against the firearms industry.

“Our concern — issuers, bond counsel or others — is that we can make that representation, but the AG may not approve of it. They can say: ‘We’re not going to approve.’ Then you’ve got a failed bond proposal and you have to break a lot of contracts.”

Texas Comptroller Glenn Hegar noted in a statement this summer that SB 19 applied not just to the underwriters but their counterparties, as well.

“The new contract provision will require prospective counterparties to verify that they do not have a policy (written or otherwise) that discriminates against an entity based on its status as a firearm entity or an association thereof and that it will not discriminate against such an entity during the term of the contract,” Hegar wrote. “If banks (or other entities) do in fact maintain such a policy it will likely be difficult for them to sign off on such a contract in the future.”

A change in law was cited as a factor when JPMorgan was replaced by UBS Group AG as the underwriter of a bond issue for Texas’ Decatur Hospital Authority, according to a disclosure notice on the Municipal Securities Regulatory Board’s EMMA Web site. However, the notice did not cite SB 19 specifically.

SB 19 is one of several pieces of legislation that dictate policies for corporate boards. Ben & Jerry’s was recently blacklisted in Texas for refusing to sell ice cream in the occupied West Bank of Israel.

Buy This Cheap Oil Stock for Big Dividends, Value & Upside Potential?
Here’s Why Chesapeake Energy Shares Were Halted on Tuesday
My Stock Dropped Over -20% – What Should I Do?
This Week’s Hidden Gems: (CSTE)(FBHS)- Aug 11, 2016
Iron Condors: 101 What is it and How Does it Make You Money?